The opposition National Democratic Congress (NDC) has asked the Electoral Commission (EC) to furnish it with the training manual for officials who will lead the upcoming voters’ registration exercise in the various centres nationwide.

NDC further requested for the training manual for political party agents as well as other documents and forms relevant to the registration exercise.

The party made the demand in a letter addressed to the Chairperson of the Electoral Commission, signed by it’s General Secretary, Johnson Aseidu Nketia and sighted by Citi News.

“The National’ Democratic Congress (NDC) has become aware of an ongoing nationwide training exercise being conducted by the Electoral Commission to prepare its staff to be deployed for the conduct of voter registration prior to the 2020 General Elections”.

The NDC in the letter stressed that: “as a major stakeholder whose agents have important functions to perform during the exercise to ensure its credibility, we are by this letter officially requesting the commission to supply the NDC with the above-named documents and any other material that would enable the party to prepare our agents adequately for same. Thank you.”

The NDC had kicked against the EC’s decision to register voters afresh ahead of the 2020 general elections.

Although the Electoral Commission has scheduled for a meeting with the Inter-Party Advisory Committee on Wednesday, May 27, 2020, to iron out issues with the registration exercise, the NDC has refused to partake in the meeting.

Below is the NDC’s letter to EC 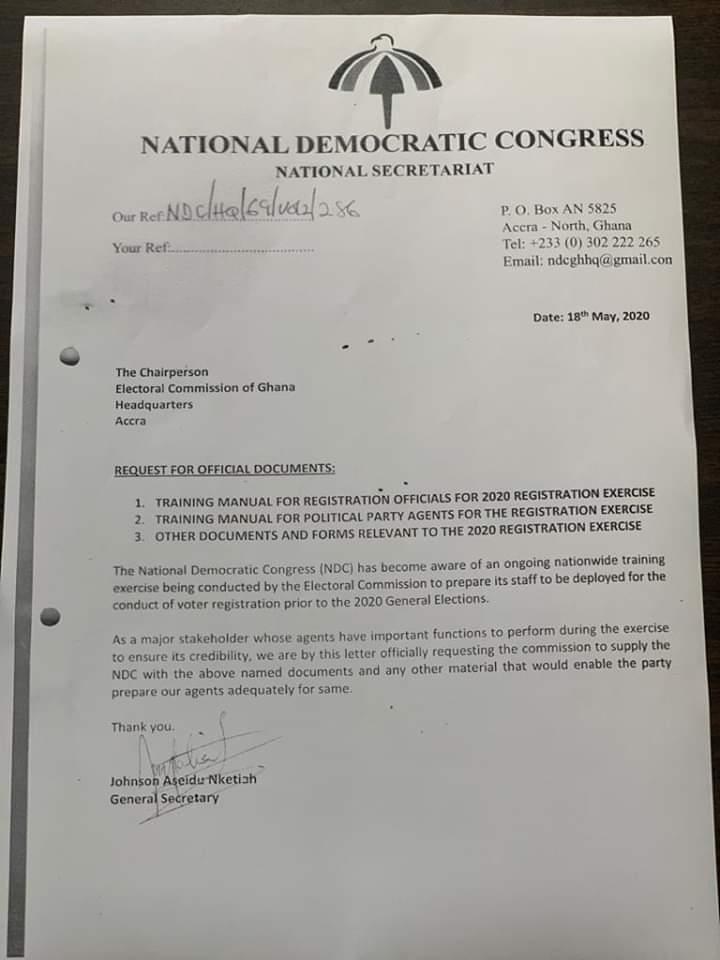