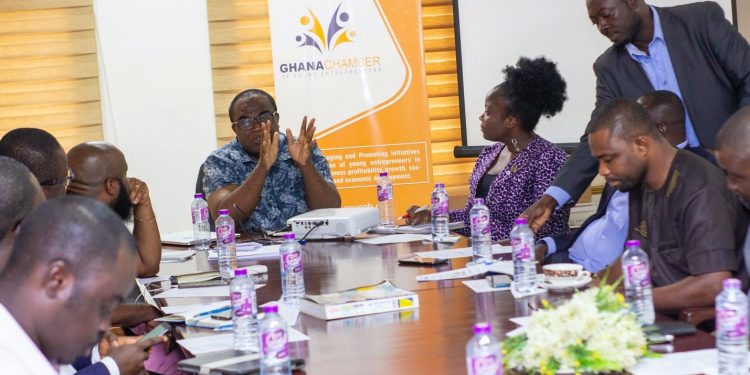 The Ghana Chamber of Young Entrepreneurs has called on the National Board for Small Scale Industries (NBSSI) to as a matter of urgency consider businesses owned and run by young people when disbursing the GHS600 million stimulus package earmarked for businesses.

The chamber said this call has been necessitated by results emanating from a survey conducted on the impact of the COVID–19 pandemic on the operations of its members.

Speaking at the head office of the Chamber, the CEO, Mr Sherif Ghali indicated that the survey which was conducted from April 13th to April 30th 2020 revealed that about 45% of Small and Medium Enterprises (SMEs) owned and run by young entrepreneurs are likely to fold up which will subsequently result in about 60% of persons employed by young entrepreneurs losing their jobs.

He said this, therefore, calls for an immediate intervention since young entrepreneurs constitute a greater percentage of the SME population in the country and thus contribute significantly to the growth of the economy. He said the government’s 600 million stimulus package, therefore, could not have come at a better time than this.

He called on NBSSI (the Government agency mandated to carry out disbursement of the fund) to earnestly consider young entrepreneurs during the evaluation and disbursement period.

“On many instances, interventions such as this are only focused on big entrepreneurs or enterprises. Young people are always marginalized for whatsoever reasons. So, we believe the trajectory for this package should be different. A special treat should be given to business owners under 35 years since they are the future giants of our economy.”

He further stated that most of these young business people are considered high risk and as a result rarely get access to bank loans or investment support.

“So, this will be the opportunity to help them out especially in these uncertain times.” He lamented.

He used the opportunity to thank NBSSI for putting in place measures that seek to make the disbursement process transparent through broad consultations.

“It is essential to alleviate the fears of many that perceives the fund could be politicized. He added.

The Award-winning young entrepreneur and CEO of the official network of young entrepreneurs also disclosed that the Chamber will soon be launching an initiative which will seek to complement Government’s efforts by looking for funds and grants to support youth businesses.

President Nana Addo Dankwa Akufo-Addo, on April 5, announced a soft loan scheme of up to GH¢600 million for SMEs, which would sustain the country’s affected industries and address the disruption in economic activities caused by the COVID-19 pandemic.

“Government, in collaboration with the National Board for Small Scale Industries (NBSSI), Business and Trade Associations and selected commercial and rural banks, will roll out a soft loan scheme up to a total of GH¢600 million, which will have a one-year moratorium and two-year repayment period for micro, small and medium scale businesses,” he stated.

In view of the impact of the disease on Ghana’s economy, which is expected to cost in excess of GH¢9 billion, the government set aside a stimulus package of GH¢1 billion for industry.