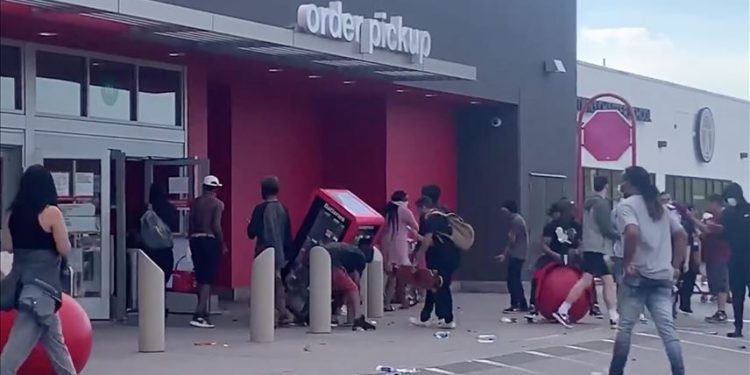 Protesters took to the streets in the US city of Minneapolis for a second day Wednesday over the death of George Floyd, an unarmed black man who died after being pinned down by a white police officer.

A large crowd gathered outside the police department’s 3rd Precinct headquarters in Minneapolis in the state of Minnesota and hurled bottles and rocks at police, the Star Tribune website reported. Later in the day, an AutoZone auto parts store across from the police headquarters was set on fire.

In videos circulated on social media, looters are seen running into a Target department store and coming out with items including TVs and clothing. Looting was also reported to have taken place on Hiawatha Avenue at a tobacco store, a Dollar Tree and a liquor store.

In a statement, Target spokesman Joshua Thomas expressed sorrow over the death of Floyd and said the store on Lake Street will not open until further notice.

“We decided to close our Lake Street store earlier today and worked to ensure all of our team members were accounted for and safe. Our focus will remain on our team members’ safety and helping our community heal,” said Thomas.

“For everyone’s safety, please leave the area and allow firefighters and paramedics to get to the scene,” said Walz.

Floyd, 46, was arrested Monday after reportedly attempting to use a counterfeit $20 bill at a local store.

Video footage on Facebook showed him handcuffed and cooperating.

However, the police claim he resisted arrest. One of the officers kneeled on his neck, despite Floyd’s repeated pleas that he could not breathe.

Shortly after, Floyd appeared to lose consciousness, but the officer maintained his position on the victim.

He died shortly after being taken to a hospital.

Four officers have been fired over the incident, which sparked mass protests and an outcry against police brutality.

The protests turned into riots Tuesday after demonstrators surrounded the Minneapolis Police Department’s 3rd precinct. Windows of the building and police vehicles were smashed and vandalized with spray paint.

Do parliamentarians owe Ghanaians a duty to reveal their COVID-19 status? [Article]