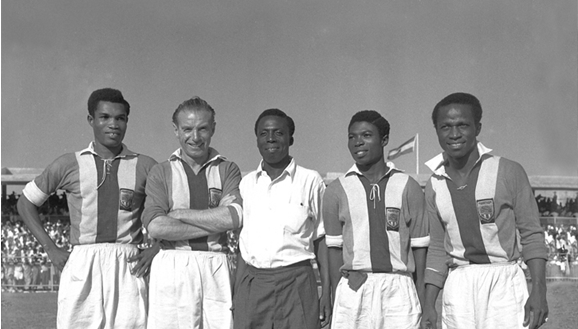 Football is by far the most revered sport in Ghana. It remains interwoven with our sociocultural identity as a Republic. Our national teams continue to be a great source of pride and an important unifying factor for Ghanaian citizens. Strangers, and even the bitterest foes, in a wave of euphoria, would rarely ever resist embracing each other in celebration of a Black Stars goal.

On the other hand, the perennial rivalry between Accra Hearts of Oak and Asante Kotoko splits the Ghanaian football world like none other. I happen to have found myself on the side of the ‘Never Say Die’ spirited rainbow-coloured club somewhere in 2002 — the famous Hearts of Oak, affectionately known as Phobia.

I could not interpret the rules of the game then as shrewdly as I can now. It was simply about the thrill of the sport, the cult of celebrity and the athleticism of the footballers. I had not yet volunteered to join the fraternity of fans as another self-employed unofficial staff for Accra Hearts of Oak. If you’d like to witness a classic scenario of constructive criticism, simply engage Phobia enthusiasts in a pre-match, halftime or post-match analysis and you would absorb the dedication fans have for this club at the speed of light.

Supporters clubs, such as the Indomitable Chapter 88 of Kotobabi, Greenford Guest House would congregate to carefully deliberate over the management of the club and to curate the carefully coordinated morale-boosting gestures which the excitement of the stadium experience has been attributed to.

The oldest existing club in Ghana today, Accra Hearts of Oak is widely acknowledged as one of the greatest African football teams ever. The club, founded on 11 November 1911, emerged as the dominant team of the Accra Football League during the Gold Coast and managed to maintain superiority over the beautiful game throughout the post-independence era too. The club has lifted the Ghana Premier League for a record 20 times and the FA Cup 10 times, so far.

I owe much of my affection for Hearts of Oak to the household chauffeur Mr Sarpong.

Sarpong, who often played the Walatu Walasa album by the Wulomei music group in the car, would seize any opportunity to narrate his personal milestone as a witness of the triumph of Hearts of Oak over Kotoko in 1999 at the Accra Sports Stadium; a dramatic Ghana Premier League finale. He glorified the goals netted by Emmanuel Kuffuor and Ishmael Addo during the last 16-minutes of the match. Hearts secured a fourth successive league title that year and qualified to represent the Republic at the Confederation of African Football championship. The following year, the legendary Coach Jones Attuquayefio led Hearts of Oak to the pinnacle of sporting excellence by clinching an iconic treble – the Ghana FA Cup, the Ghana Premier League and the CAF Champions League.

After 107 years of excellence, it has become difficult for the club to challenge the iconic status quo it has set as both as custodians of Ghanaian football. But as our battle song professes — “Our roots, our roots are old, so be quiet and don’t be silly. We are the famous Hearts of Oak. We never say die!”. Despite having won the Ghana Premier League since 2009, Accra Hearts of Oak shall rise above its recent setbacks and assume its throne once more as the alpha club that once won the Ghana Premier league six successive times (1997-2002).