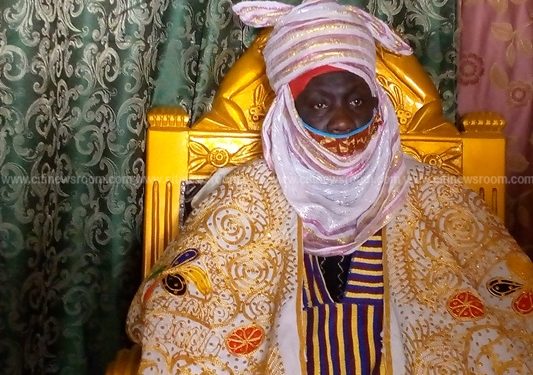 The Chief of the Fulani Community in the Ashanti Region, Alhaji Osman Bin Ahmed has commended Vice President, Dr Mahammudu Bawumia for the swift intervention he made to help settle ground rent arrears of the Kumasi Central Mosque.

A delegation from the office of the Vice President on Friday, 26th June 2020 presented GHS85,000 to the leadership of the Zongo community meant for the payment of ground rent of the mosque which has been in arrears since 1964.

Leadership of the mosque after a thorough enquiry at the Lands Commission realized that the facility owes the state a sum of GHS 120,000 in ground rent.

The Muslim community after petitioning the office of the Vice President was able to raise GHS35,000 as part of efforts to settle the over five-decade debt.

Following that, the office of the Vice President intervened to save the Central Mosque from possible lock up or rift between the Muslim community and the state.

The Fulani Chief who could not hide his appreciation and excitement said the intervention by the Vice President was timely and must be commended.

He indicated that Muslim communities, especially those in Kumasi have benefited in diverse ways since Dr Bawumia was chosen as the Vice President by President Akufo-Addo when he assumed office after the 2016 general elections.

“Just last Friday, the Vice President has intervened in the payment of the ground rent of the Kumasi Central Mosque. There was an oversight by our people and over 50 years they had not paid the ground rent. But God is so good and for the care that he has for our people, he has given some amount to be added to what has already been generated to pay for the ground rent. We are using this opportunity to thank him very, very much for what he has done,” the Chief added.

Plans are also underway by the office of the Vice President to give a facelift to the Kumasi Central Mosque.

Alhaji Osman commenting on that, appealed to the Vice President to include the establishment of an ICT centre at the premises of the Central Mosque to help youth within the community acquire knowledge.

This, he indicated will minimize issues where youth within the communities usually troop internet cafes and engage in acts that are detrimental to their future.

The Chief, who is a strong advocate for the development of the Zongo community maintained that the only way the youth in those communities can develop is through education.

With education, he noted that the long-held perception that people from Zongo communities are trouble makers and truants will wane.

He admonished youth in the Zongo communities not to allow politicians to use them for their selfish interest ahead of the 2020 general elections.

He also called on inhabitants in Zongo communities to go all out and partake in the upcoming Voter’s Registration Exercise but should abide by the rules and regulations governing the process.

Alhaji Osman commended the President for choosing Dr Bawumia as his running mate for the 2020 general elections.