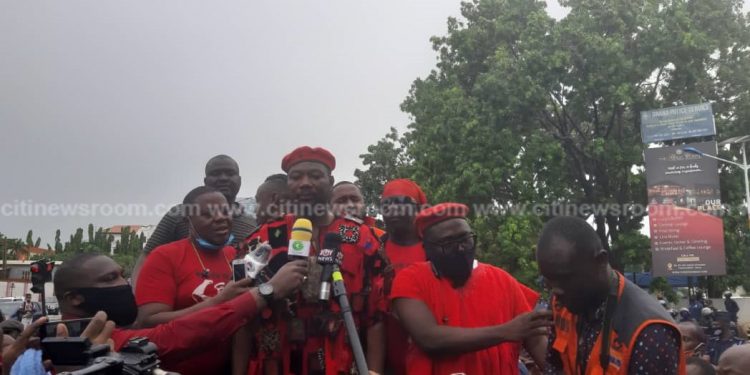 The Chairman of the People’s National Convention (PNC) has been discharged after he was interrogated by the Criminal Investigations Department (CID) of the Ghana Police Service.

Mr. Mornah was at the offices of the CID to answer questions about some public statements he made which were deemed to be threats on the Electoral Commission.

After he was discharged, he told a group of teeming supporters that he stands by his comments and will continue to speak freely against what he described as “ills in society.”

“We shall not allow our freedoms in any form to be trampled by any person. President Nana Akufo-Addo cannot stifle the freedoms that we are granted by the Constitution. Those freedoms include the freedom to speak and we will speak. We will dare them and we will speak the truth because, at all point in time, we must correct the ills in our society which if we don’t correct, has the potential of eroding the peace and stability of our nation,” he said.

“This afternoon I have just gone through a cordial process with the police. My statement is that I made the statements that are contained in the 37-second video and that I stand by those statements and I have nothing more to add…The EC must know that their actions have the potential to plunge this nation into calamity. We are cautioning them that if they do not heed to us and anything happens to this country, they will not be safe,” he said to loud cheers by the supporters who defied the rains to wait outside while he was being interrogated.

A group escorting Mornah to the CID head office were stopped by the police earlier in the morning.

They were stopped by armed officers who later allowed only Bernard Mornah and his lawyers to proceeded to the premises of the police headquarters.

The CID on Thursday, May 28, 2020, issued the invitation to the PNC National Chairman who is quoted to have said that he will resist every attempt by the EC to compile a new voters’ register.

“People who are already Ghanaians and already registered are going to be taken out of the voters’ register. Don’t think confusion will come at the registration station but if confusion comes there, you think the EC staff will be safe? We will beat each other there and we will kill each other there if that is what the EC wants to lead this nation to,” Mr. Mornah is quoted to have said at a press conference organized by the Inter-Party Resistance Against New Register (IPRAN) on May 26, 2020.

But Mornah in an earlier interview on Eyewitness News said he does not see anything threatening about his comment.

According to him, his comment was only a piece of advice to the EC against the compilation of a new register ahead of election 2020.