BoG Governor appears before PAC after threat to cause his arrest 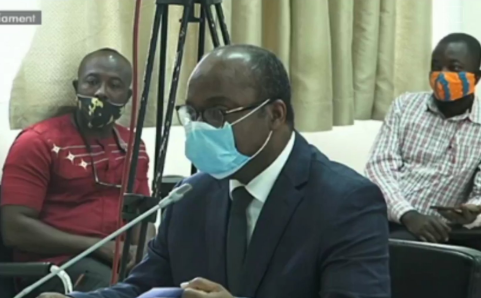 This comes a day after the PAC threatened to cause his arrest if he failed to appear before the committee today.

The committee on Tuesday, June 23, 2020, expressed its displeasure with Dr. Addison’s failure to appear before it after several invitations.

The committee deferred its sitting on Tuesday over the absence of Dr. Addison.

PAC complained that several invitations to the Governor to answer some questions concerning the accounts of the central bank had been ignored.

But Dr. Addison finally appeared before the committee as it considered the Report of the Auditor-General on the statement of Foreign exchange receipts and payments of the Bank of Ghana for 2017 and 2018.

During the meeting today, Dr. Ernest Addison told the committee that activities of illegal forex trading have reduced in the country.

According to the Governor, the shortage of foreign exchange which gives rise to the activities of illegal forex trading, also known as the Black Market, is not prevalent.

He attributed this to the government’s better management of the economy.

“The black market is an illegal activity and the Bank of Ghana has collaborated with the security agencies to ensure that they don’t thrive and we have had a few exercises in different parts of the country literally going out there to arrest black market traders and foreign exchange.”

“It is an illegal activity and the security agencies are on top of that issue. I think the pressure in terms of the prevalence of black market activities has gone down and the reason is that the economy is relatively doing well and there is no big shortage and therefore the incentive too isn’t there. This is an illegal market and you are not going to completely wipe it away. From time to time we are cooperating with the security agencies to enforce the law,” he said.

Give us an evacuation timetable – Stranded Ghanaians in India

Give us an evacuation timetable - Stranded Ghanaians in India