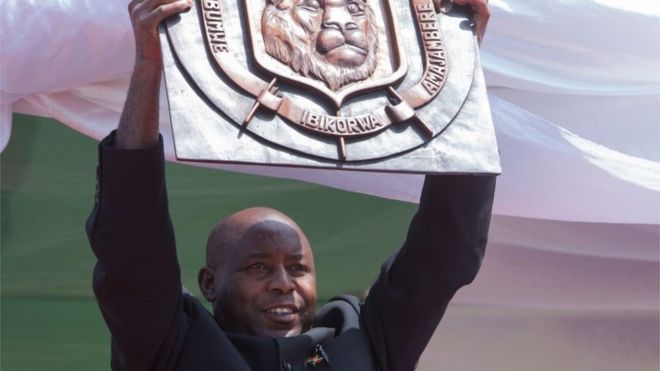 Burundi’s new president has warned opposition parties that they “would no longer get space” in the country, questioning “why should one oppose the government”.

Evariste Ndayishimiye made the statement during his hour-long inauguration speech on Thursday.

He also promised freedom of expression and protection of human rights.

Mr Ndayishimiye had been due to take power in August after being declared the winner of May’s presidential election, in which he was the candidate of the ruling party. The opposition said the poll was rigged.

No foreign heads of state were present when he took the oath of office in the administrative capital, Gitega, where he pledged to defend the nation’s interests and unify its citizens.

In his speech, the new president also asked media and human rights activists to partner with the government to tackle national issues, otherwise “they will be work for others, not Burundians”.

He also called for Burundi’s refugees to return home but warned them not to destabilise the country.

People attending the inauguration were told to arrive early to allow time for temperature checks and other coronavirus measures but once in the stadium, there was no social distancing.

Mr Nkurunziza died aged 55 on 8 June after suffering a cardiac arrest, the government said. There are unconfirmed reports that he was suffering from Covid-19.

He had been in power for 15 years.

According to Burundi’s constitution, if the head of state dies in office then the president of the national assembly, currently Pascal Nyabenda, should succeed him.

But after a ruling by Burundi’s Constitutional Court, Mr Ndayishimiye’s inauguration in Gitega was brought forward.