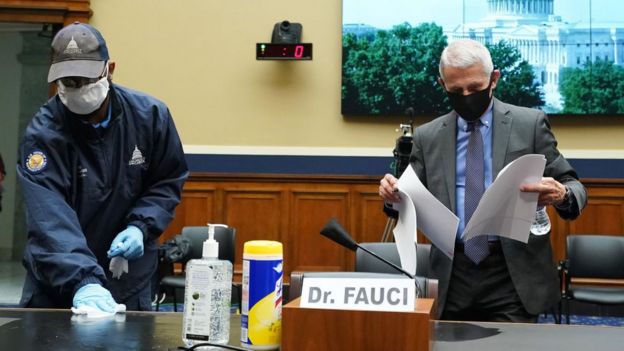 America’s top infectious disease expert has told lawmakers that the US is seeing a “disturbing surge” in coronavirus infections in some states.

A panel of health officials, including Dr Anthony Fauci, said the next few days will be crucial to stem the new outbreaks.

Cases are climbing rapidly across a number of US states.

The four top experts also testified they were never told by President Donald Trump to “slow down” testing.

Their comments come after Mr Trump told a weekend rally in Oklahoma that he had asked his team to do less testing to help keep official case counts down.

“To my knowledge, none of us have ever been told to slow down on testing,” Dr Fauci, the director of the National Institute of Allergy and Infectious Diseases, testified to a congressional committee investigating the US response to the pandemic.

“In fact, we will be doing more testing,” he added.

The other three officials – representing the Centers for Disease Control and Prevention (CDC), the Food and Drug Administration (FDA) and the Department of Health and Human Services – also disputed Mr Trump’s comment, saying they had never been directed to slow testing.

Brett Giroir, the health department assistant secretary who oversees US diagnostic capacity, told lawmakers he expects the US will be able to conduct 40 to 50 million tests per month by autumn.