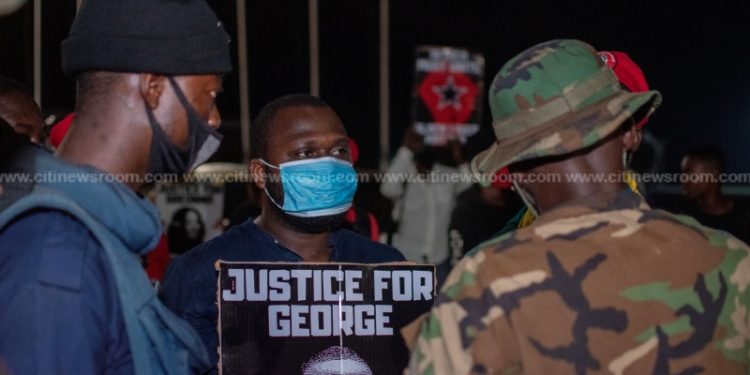 Economic Fighters League is demanding explanations from the Ghana government over circumstances that led to the disruption of its Black Lives Matter vigil at the Black Stars Square on Sartuday.

The vigil was organized in Ghana as a sequel to the global agitation following the tragic death of George Floyd in the US and also to condemn all forms of oppression.

It was organized by the Economic Fighters League on Saturday evening went on peacefully for about an hour when some armed police and military officers stormed the venue and disrupted the exercise.

The security officers had claimed that the vigil was illegal although the organizers insisted that they notified the police in line with the Public Order Act.

Leader of the group, Ernesto Yeboah was subsequently arrested and detained; a development patrons of the vigil were unhappy with.

In a statement chronicling the turn of events, the group asked three questions and demanded answers from the Government of Ghana.

The group also appealed to the United Nations (UN), Human Rights Watch and the international media to pressurize authorities to explain why the vigil was disrupted.

“We urge the United Nations, Human Rights Watch, and the world media, to ask the Ghanaian authorities three things. Why display so much hypocrisy, after holding a state-sponsored “funeral” for Floyd, just 30 hours earlier? Why risk the lives of many, by instigating the breaking of social distancing protocol, at a peaceful vigil? Why was the notice to gather, ignored? Who gave the order from above?”

Meanwhile, the leader of the Economic Fighters League, Ernesto Yeboah has been released from police custody.

A day after his arrest, Mr. Yeboah is seen in a video announcing his release stressing that his continuous arrest will not discourage him from seeking freedom for Africans and the continent.

Click here for the full statement by the Economic Fighters.