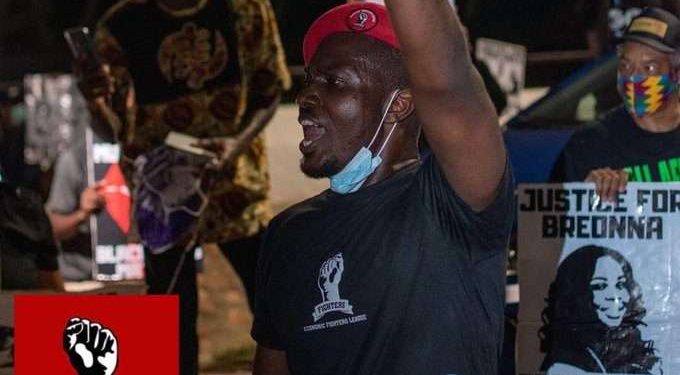 Leader of the Economic Fighters League, Ernesto Yeboah has said he was manhandled by the Police when he was arrested at the Black Lives Matter vigil held last Saturday.

Ernesto Yeboah said he had to comply with the Police to avoid a disruption of the vigil.

“I was manhandled by officers in the way I was held. I was forcibly taken against my will but I had to comply because I knew if I did not make it easy for them to take me, they will disrupt the vigil.”

The Police had said Ernesto was arrested because the vigil, which they described as a protest, was not authorized.

Ernesto Yeboah on Citi TV’s The Point of View, however, denied this claim, clarifying that the group notified the Police in line with the Public Order Act.

“Two very important legislations were at the centre of our planning. The first being the Public Order Act and the second being the E.I 64 and so on the basis of that, we scripted our notice of vigil to the Ghana Police, addressed to the IGP, through the Regional Police Commander and we also copied the Minister of Interior and Minister of Foreign Affairs. This was on the 1st of June.

“The event was supposed to be held on the 6th of June so that was more than the five days clear notice that we needed. This was a notice of vigil and this is not the first time we have organized a programme at that phase. It came as a big surprise to us when we were speaking to the Director of Operations at the National Security when he said he had not been informed about that. Even before the event itself, we put out an outline,” he explained.

Ernesto said the Police failed to give tangible reasons for his arrest and only pointed out that they had received an order “from above” to do so.

“The National Security and Police were there. We told them we had followed due process and all that they kept saying was that an order from above says they should disrupt the process.”

Narrating how his arrest occurred, Ernesto pointed out that the Police and military “numbering about 20 or 30” were “holding guns as if they were on a war zone” when they showed up at the vigil.

In 2019, Ernesto and two others were similarly arrested at the Parliamentary Protection Unit for picketing over plans to construct a new Parliament complex.

The three in the middle of deliberations in the House at the time begun shouting ‘drop that chamber’. Their chant attracted the attention of MPs.

They were subsequently arrested by officers of the parliamentary security unit.