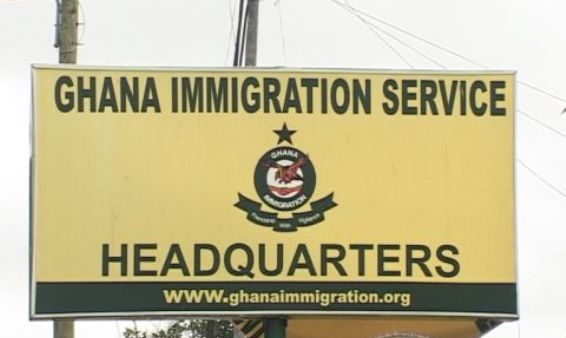 The Chief of Kuyuli, Ubore Nambu Jaboki IV, has asked the Ghana Immigration Service (GIS) to offer an “official unqualified apology” to the people of Kuyuli in the Tatale district of the Northern Region over some comments made against them.

The Service, in a statement on Monday, indicated that “the people of Kuyuli in the Tatale District are noted for their notoriety in smuggling activities”.

This was after it reported that an Immigration officer had died in a crash at Kuyuli whilst in pursuit of suspected smugglers on a motorcycle. His colleague has also been left injured.

Describing this comment as “an untrue and unfortunate description” of the Kuyuli people, the Chief says the GIS must immediately retract its statement since it has damaged the reputation of his people.

He said in the statement, “I, therefore, want to bring to your attention that the description of my people as being “noted for their notoriety in smuggling activities” in your press release is untrue and unfortunate. This is not just an insult to the community and it has portrayed my people bad and unpatriotic citizens. This unfortunate and untrue description of my people by GIS has damaged the community and its people’s reputation at home and abroad.”

“My people and I are therefore demanding an official unqualified apology and retraction of this untrue and unfortunate statement from your outfit and a publication of same in the media to correct this wrong impression your statement has created in the minds of Ghanaians and the global community at large about Kuyuli community and its people,” the statement added.

Chief Ubore Nambu Jaboki IV further stated that he was always ready to assist the GIS with investigations into the matter.

He also expressed his deepest condolences “to your service and to the bereaved family for the loss of a loved one and also wish the injured officer a speedy recovery”.

On Sunday, June 21, two Immigration officers who were scheduled for night patrol at Kuyuli were involved in an accident which unfortunately took the life of one of them.

The other officer has been left in a critical condition from the same crash.

The deceased officer was confirmed dead on arrival at the Tatale District Hospital.

Both of them were then transported to the Tamale Teaching Hospital “for further action”. 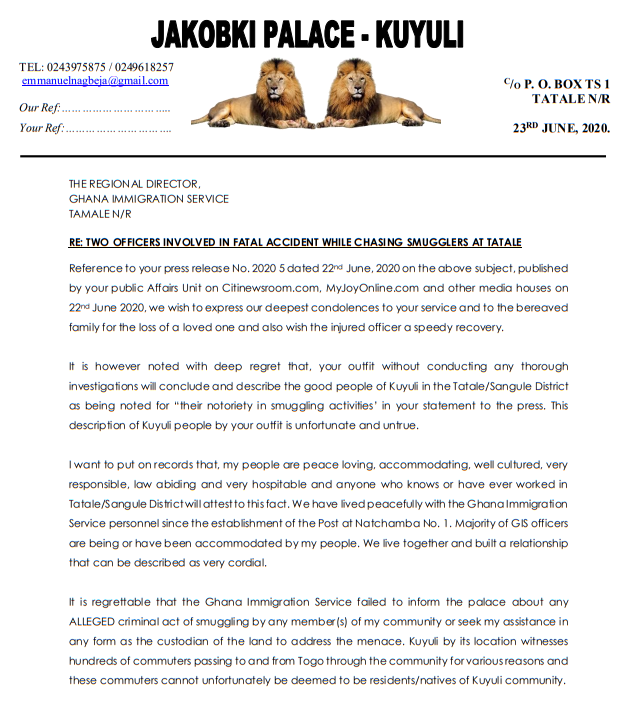 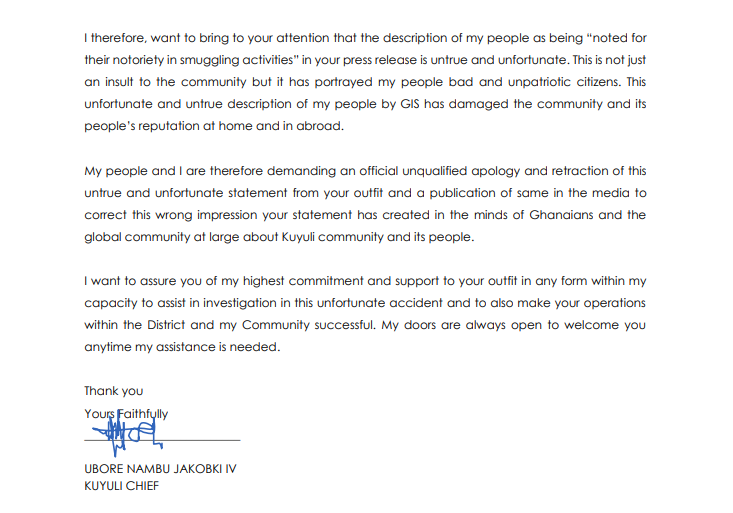 Mozambique: Main opposition party apologises after one of its MPs appears on TV drunk