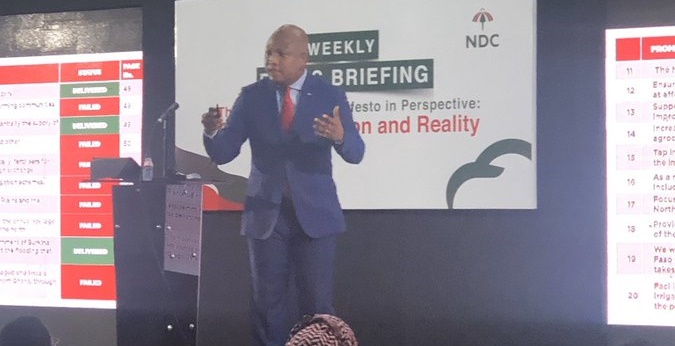 The largest opposition party, the National Democratic Congress (NDC) has launched a website to track what it terms as failed promises of the New Patriotic Party (NPP) government.

The website, www.nppfailedpromises.com, according to the party, is to help Ghanaians fact-check the promises of the government.

The website presents detailed accounts and lists all the promises it has tracked the government to have made in its manifesto and those it has made after coming into power.

Making the presentation at the briefing, the immediate past Deputy Minister of Education Samuel Okudzeto Ablakwa said a total of 631 promises were found in the 2016 NPP Manifesto but only 86 of them were found to have been delivered.

He said the NDC relied on credible documents and data to arrive at its conclusion and it is far less than the 78% of the NPP projected itself to have achieved.

“We have discovered that the 631 promises that we listed, after thorough analysis, combing through documents, what they’ve told us in Parliament, ladies and gentleman, it will shock you to realize that only 86 out of this 631 promise that has been delivered. So the percentage achieved is 14%, not 78%,” he said.

In February 2020, the New Patriotic Party (NPP) government unveiled a website to solely monitor its manifesto promises and track the successes it has chalked.

The website, www.delivery.gov.gh, provides the status report of the NPP’s 2016 manifesto promises also gives data on the gains made by the government so far, three years after assuming power.

Dr. Bawumia reiterated that government has achieved 78% of its promises contrary to the 72% reported by some policy think tanks, although no matrix or indices were given to back the claims other than the graphs that were projected at the town hall meeting.

“In all, we made 388 promises in our manifesto. The most recent validation exercise at the end of January 2019 shows that we had delivered or are delivering on 303 (78% of the promises),” Dr. Bawumia said at the time.