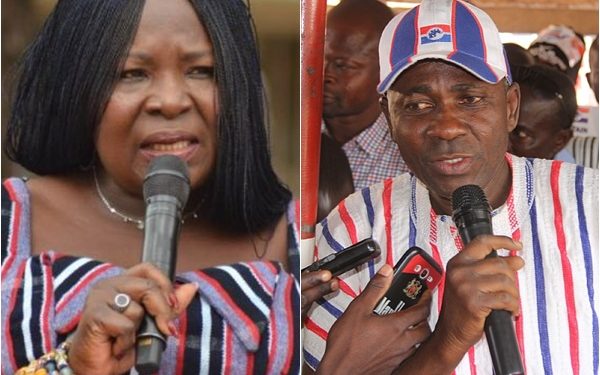 The two ministers after a successful battle with their contenders are hopeful of retaining the Navrongo Central and Zebilla constituencies respectively for the NPP in the general elections.

Tangoba Abayage becomes the first female NPP aspirant ever to beat an incumbent MP in the constituency.

In her victory speech, Mrs. Abayage called for unity ahead of the December 2020 general elections.

“I will stand here and make that solemn pledge that my purpose for annexing this seat is to unite the New Patriotic Party in the Navrongo Central constituency. We may have our difference but trust me, if we surmount our difference which we can because we are human beings, we will solve our problems and come together and make sure that for the first time, we are going to win the Navrongo Central constituency with a landslide on 7th of December and will win this seat for the President.”

Tangoba Abayage hinted of leading a campaign that has never been felt in this constituency adding that
“I’m the lioness. We are going to lead this pride to hunt and we are going to bring the goodies home.”

She assured party members of working together with Kofi Adda to retain the seat for the NPP.

At the end of polls, Frank Adongo polled 323 votes out of 603 votes to beat his contender who had 280 votes.

In his victory speech, he said he will work hard to retain the seat for the NPP in the general elections.

“I can assure you that the Zebilla parliamentary seat is winnable for the NPP come 7th December 2020.
This is because the one that I was able to beat [Cletus Avoka] is coming again and I have known all his political strategies so I’m sure I’m going to retain the seat,” he said.

In the Tempane Constituency, however, the incumbent MP who doubles as the Deputy Attorney General and Minister for Justice, Joseph Dindiok Kpemka was not contested in the parliamentary primaries.