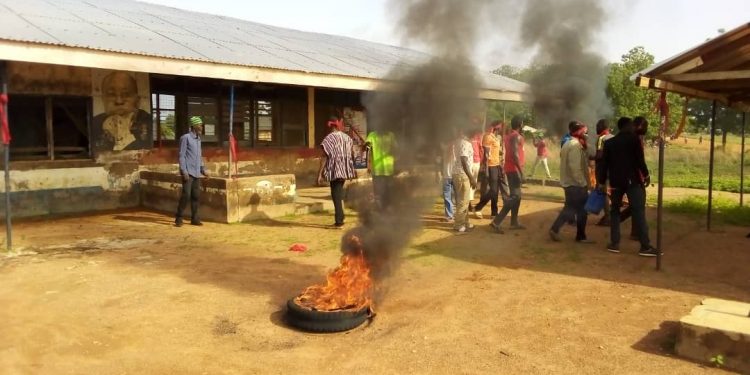 Some supporters of a New Patriotic Party (NPP) parliamentary aspirant in Saboba in the Northern Region, Emmanuel Kotin on Saturday morning (June 6, 2020) burnt tyres in front of the party’s constituency office to register their displeasure over his disqualification from the race.

The supporters massed up at the entry to the constituency party office and smashed the louvre blades of the window.

The supporters allege that the defence Minister, Dominic Nitiwol, is behind the disqualification of Emmanuel Kotin.

Chanting “No Kotin No Vote”, they called on the National Executive Council of the NPP to reverse the disqualification of their candidate immediately.

Leader of the group, Samuel Oyal who spoke to Citi News, said the supporters have threatened to burn the party office in three days if the decision of the NEC is not reversed.

“We have burnt the tyres in front of the party office because we can see that there is no fair play in NPP today. Emmanuel Kotin has been disqualified unfairly. We believe that the basic principle of any democracy is the sovereign will of the people but that is not in the NPP today. He has been disqualified without any reason. All that we know is, the disqualification is because of the personal interest of the Defence Minister. All that we are saying is, Emmanuel Kotin be reinstated in three days. If that is not done, the party will see mass destruction and voter apathy in Saboba on December 7, 2020.”

The upcoming NPP primaries have been characterized by allegations that some executives are making incumbent MPs run unopposed by disqualifying some aspirants.

For instance, 64 candidates were passed in the Eastern Region after the vetting. Notable among the candidates who did not pass the vetting process was Gloria Ofori-Boadu who had been disqualified from contesting the Abuakwa South constituency.