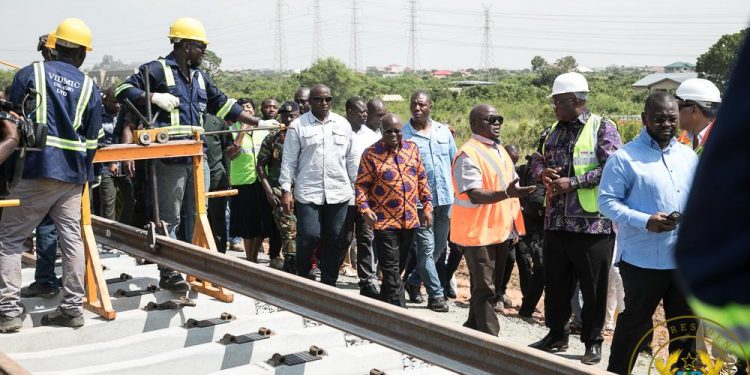 The ongoing rail project which was supposed to end in August 2020, was halted due to the COVID-19 pandemic and the confirmation that over 70 workers tested positive for the virus.

Speaking to Citi News, Joe Ghartey said most of the affected workers have recovered.

“What happened was that the contractors were at the two camps of the company at Afienya and Kpong. Those in the first camp were the workers finishing the last stretch of the rail at Mpakadan. They were already working on it from Mpakadan to the other part of the Volta River. So what will happen is that, now that they have recovered, they are going to continue work. And, I think that we have to go through the right process. We have received a letter from the Eastern Regional Health Directorate that they have all recovered. I am sure by the end of this week, they will start working”, he said.

In December 2019, the Minister disclosed that 28 kilometres of track have been laid, with the contractor assuring that 40 more kilometres of the track will be completed by the end of this year.

The Project, when completed will be a modern, standard gauge rail line.

Meanwhile, 95 persons out of a total of 134 who tested positive for COVID-19 in the Eastern Region have fully recovered as of Tuesday, June 2, 2020.

The Eastern Regional Health Directorate said there is ongoing surveillance by health professionals to make sure infections are reduced and contained.

At the official reopening of the Afcon Construction Camp B site at Kpong in the Lower Manya Krobo Municipality, the Eastern Regional Health Director Dr. Mrs Alberta Biritwum Nyarko indicated that 7 out of 21 health workers who got infected in their line of duty have also fully recovered.

On his part, Eric Kwakye Darfour, the Eastern Regional Minister who was impressed with the 100 percent recovery rate of all infected engineers working on the Tema to Mpakadan railway project at the AFCON camp B where the region recorded its first case charged the workers to observe all the safety protocols as they resume work on the project.