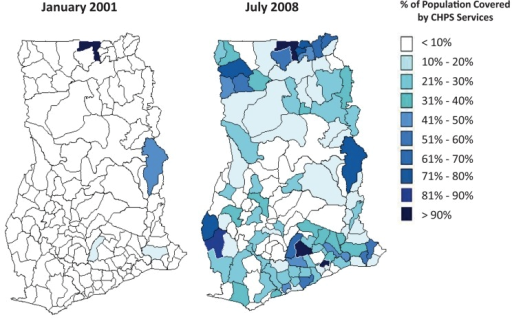 During the out-dooring of the running mate to the National Democratic Congress’ flag bearer, Mr. Mahama promised that in the event he becomes President, he would ensure Primary Health Care is made free for Ghanaians by the end of 2021. As a concerned Ghanaian, I believe it is legitimate to question this claim not merely for its grandiosity, but more importantly, because it seeks to solve a virtually nonexistent problem, sidesteps the challenges with the current National Health Insurance Scheme, it is nebulous and flies in the face of his 2012–2016 administration’s track record.

In Ghana, the Community Health and Planning Services (CHPS) is the national Primary Health Care (PHC) mechanism for achieving Universal Health Coverage. It was piloted in Ghana in the 1990s, and subsequently implemented and scaled during the John Agyekum Kuffour administration. Whereas the CHPS Programme was aimed at bringing health infrastructure and delivery “closer” to the people, the National Health Insurance Scheme was introduced to eliminate financial barriers to health care. Thus, a properly functioning NHIS and CHPS would have the combined effect of providing both primary health care and the financing to pay for it.

However, it is generally held that scaling up has not been as rapid as expected. To make up for this, in 2014, former President John Mahama introduced a voluntary salary cut for government appointees. Under this initiative, government appointees would contribute 10% of their salaries to a fund to be used to build more CHPS compounds. As laudable as that idea was, proceedings from a Public Accounts Committee sitting in 2017 suggested that the accruals from those deductions were missing. Those same proceedings also suggested that some appointees stopped contributing to the fund and had their monies refunded. This shows the unreliability of voluntary donations as the cornerstone of a financing scheme for social policy.

Thus, the National Health Insurance Scheme, financed by reliable and constant revenue sources like the National Health Insurance Levy, provides a more stable, sustainable and pragmatic approach to the financing of CHPS. Thankfully, the NHIS already covers CHPS compounds and the services they provide. Additionally, it covers 95% of diagnosed conditions. It stands to reason that all the types of conditions which would be diagnosed and treated at the CHPS/Primary Health Care level, are covered by Scheme. The question, therefore, is how one intends to make services which are already free in the status quo, free by the end of 2021? All Ghanaians are eligible subscribers of the NHIS. In effect, all Ghanaians registered under the NHIS have free access to the services provided under CHPS (the national mechanism for Primary Health Care in Ghana). This realization leaves one at a loss as to WHAT exactly Mr. Mahama intends to make free. The “WHAT” leads to my next point.

Primary Health Care, as stated in the Alma-Ata declaration, and which was referenced by former Communications Minister Dr. Omane Boamah in his praise of Mr. Mahama’s FPHC proposal, provides that a robust PHC must include health education, promotion of food supply and proper nutrition, an adequate supply of safe water and basic sanitation, maternal & child health care, including family planning, immunization against the major infectious diseases, prevention & control of locally endemic diseases, appropriate treatment of common diseases & injuries and provision of essential drugs. Comparing these components to Ghana’s Policy Directives guiding the implementation of the National CHPS policy, it will be realized that these are largely captured under the CHPS package. The CHPS package includes Maternal and reproductive health, Child Health services (EPI, nutrition education etc), treatment of minor ailments, health education and promotion, sanitation and counselling. Thus, the very components of primary health care are already being provided under the CHPS programme and financed by the NHIS. In 2019, the Ghana Country Director for the World Health Organisation commended the Nana Akufo-Addo administration for strengthening Primary Health Care (PHC) through the Community Health Planning and Services (CHPS) concept.

If the components of primary health care are already freely provided through CHPS and NHIS, what does Mr. Mahama intend to make free? Perhaps his proposal is to eliminate the use of NHIS cards for primary health care, such that any National Identification like the Ghana Card would suffice for the holder to receive primary health care. That idea in itself, is a commendable one but it cannot be presented as providing free primary health care by any stretch of the imagination. If you are entitled to free food, but need to provide a certain ID card before you receive the food, someone removing the ID requirement makes the process less cumbersome but it cannot be said that it was the person that made it free!

The National Communications Officer of the New Democratic Congress (NDC), in explaining the policy, argued that the Free Primary Health Care policy is necessary as a way to ease the pressure on the NHIS. According to him, challenges in financing the NHIS will be solved with the introduction of FPHC. Assuming the problem with NHIS (which currently covers primary health care) is funding, how will introducing a free system rather help to bridge the supposed financing gaps? If the problem is finance, surely, the solution would be to raise more revenue or proffer innovative means of finance as was suggested by the late Bekoe Amissah Arthur when he noted that government’s budget was already too strained. FPHC as a solution to the financing gaps is therefore exposed as merely one of many attempts by the NDC to attach the “free” prefix to promises without addressing the critical issues.

In fact, from 2009 when the NDC took over the reins of administration, the NHIS experienced serious funding gaps, with utilization and claims far outstripping the annual allocation to the scheme. Investment cover persistently fell below the standard 8 months from 3.6 months in 2012 to 2.6 months in 2013. The fund size also shrunk by 12.3% between 2012 and 2013. According to one World Bank Study by 2014, the NHIS’s annual deficit had reached GH¢300 million. This trend of financing gaps and deficits was seen from 2009 till 2016, with Mr. Mahama suggesting at one point the use of oil revenue to support the scheme. If this same person, who was unable to adequately finance the NHIS (for 8 years) but rather accumulated legacy debts is now suggesting a new free health policy, then I would really want to know what he takes us for.

The National Health Insurance Scheme, introduced by the Kuffour administration, and the CHPS Programme he implemented, have created the existing framework for Free Primary Health Care. Any politically motivated proposal to make what is already free, free is redundant, unnecessary and calculated to excite the voting public. It is critical to our democracy that such promises are well examined, evaluated and seen for what they truly are. Especially in the situation of Mr. Mahama and the NDC’s record with the NHIS, perhaps, the only way Mr. Mahama can convince voters to buy into his proposed “free” primary health care programme, is to visit Benin.