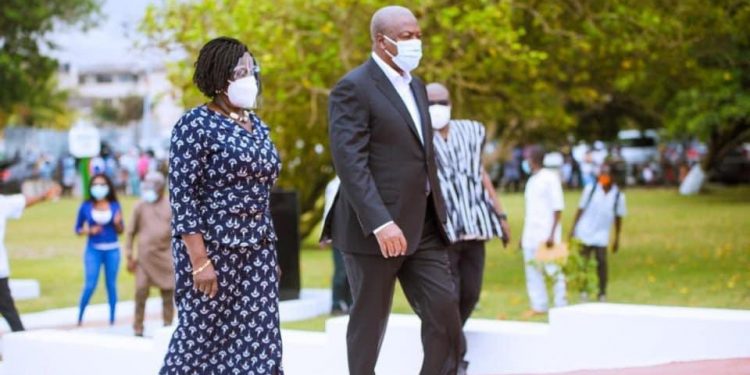 Former President John Mahama says the National Democratic Congress (NDC) has made the best choice for Ghana in the selection of Prof. Naana Jane Opoku-Agyemang as the party’s running mate going into the 2020 general elections.

According to John Mahama, the consideration of the former Education Minister goes beyond the fact that she is a woman and focuses on her competence and intellect.

Speaking at a ceremony in Accra to officially outdoor Prof. Naana Jane Opoku-Agyemang as his running mate for the 2020 elections, John Mahama said the NDC has demonstrated its commitment to inclusivity in nation-building.

“The choice of Professor Opoku-Agyemang is over and above affirmative action because she is more than qualified to serve as Vice President. She is a woman who has contributed to shattering the many glass ceilings that have held women down for generations, by becoming the first female to lead and manage a public university in Ghana,” he said.

“With Professor Opoku-Agyemang, the NDC has once again stayed with our true course, and advanced a step further in our established philosophy of inclusivity by boldly presenting one of our best in intellect and character, as our party’s Running Mate,” Mahama added.

The NDC is seeking to return to political power in the December 2020 polls after being voted out in 2016.

In 2016, John Mahama, then the incumbent, lost the election to the New Patriotic Party’s Nana Akufo-Addo.

President Akufo-Addo is seeking a second-term extension of his mandate with the same running mate, Vice President Dr. Mahamudu Bawumia.

John Mahama, who lost power with Kwesi Amissah Arthur as his Vice President at the time, earlier in July named Prof. Naana Jane Opoku-Agyemang, a former University Vice-Chancellor and Education Minister in the NDC government as his running mate into the 2020 polls.

Born on 22 November 1951 in Cape Coast, Ghana, Naana Jane Opoku-Agyemang attended Anglican Girls’ Secondary School at Koforidua and Aburi Presby Girls’ School. She then had her secondary education at the Wesley Girls High School in Cape Coast from 1964 to 1971.

She completed B.Ed.(Hons) in English and French at the University of Cape Coast in 1977 and obtained her Masters and Doctorate degrees from York University in Toronto, Ontario, Canada in 1980 and 1986 respectively.

Professor Opoku-Agyemang taught and worked at the University of Cape Coast, starting in 1986.

From 1997, she has held the position of Academic Director of the School for International Training in the History and Cultures of the African Diaspora. From 2008-2012 she was the University’s Vice Chancellor.

In October 2009, she was elected Ghana’s representative to the Executive Board of the United Nations Educational, Scientific and Cultural Organisation (UNESCO).

Ahead of the 2012 general elections, Jane Opoku Agyemang moderated the debate with Kojo Oppong Nkrumah.

Between February 2013 and January 2017 she served as the Education Minister of Ghana. On 26 October 2018, she became the Chancellor of the Women’s University in Africa located in Zimbabwe.

She has served on many local and international boards and committees such as the Centre for Democratic Governance, (CDD-Ghana), the Editorial Board of The Harriet Tubman Series on the African Diaspora (Africa World Press Inc. USA), the Africa Initiative in Canada, and the College of Physicians and Surgeons as Eminent Citizen.