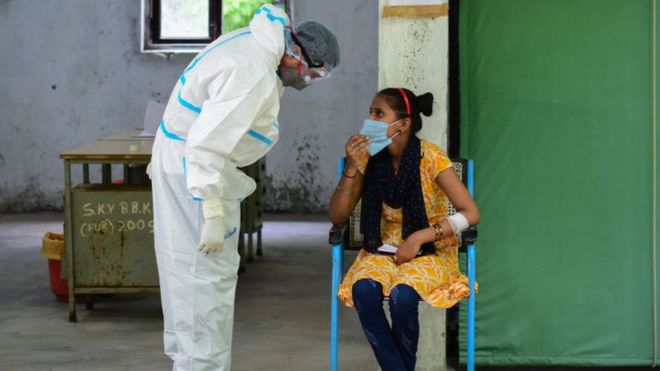 India added a record number of COVID-19 cases nearly 35,000 in the last 24 hours, breaching the one million mark.

It has the world’s third-largest caseload, after the US and Brazil the only three countries so far to record more than a million coronavirus cases.

India’s active cases account for about a third of its total tally as it has been reporting a high recovery rate and a low death rate from the virus.

But deaths have been rising. At 25,602, they are eighth-highest in the world.

India’s number of cases has been on the rise with nearly record daily surges – in recent weeks. It overtook Russia earlier this month to occupy the third spot for the highest number of coronavirus cases globally.

Although India confirmed its first case at the end of January, the pandemic took hold slowly. Experts believe it was staved off to some extent because of an early decision by the government in March to stop all international flights and enter a strict lockdown that lasted nearly two months.

Experts say the capital, Delhi, and some other states squandered the opportunity given by the lockdown to test, trace, and isolate effectively.

While the capital territory has since seen a dip in cases, they continue to rise in other parts of India.

The western state of Maharashtra is still the biggest hotspot with the highest case count- more than 280,000 – among all the states.

But potential new hotspots are emerging as states in the south Karnataka and Andhra Pradesh and in the east Bihar, West Bengal record a rapid rise in daily case numbers.

They have responded with local lockdowns – the southern city of Chennai (Madras) has emerged from a recent lockdown and Bangalore, also in the south, is currently under a week-long lockdown.

Although India has fully reopened, intermittent local lockdowns are likely to be the new normal as the country wrestles with the pandemic.

78% of students, teachers satisfied with supply of PPE to schools – Report

78% of students, teachers satisfied with supply of PPE to schools - Report