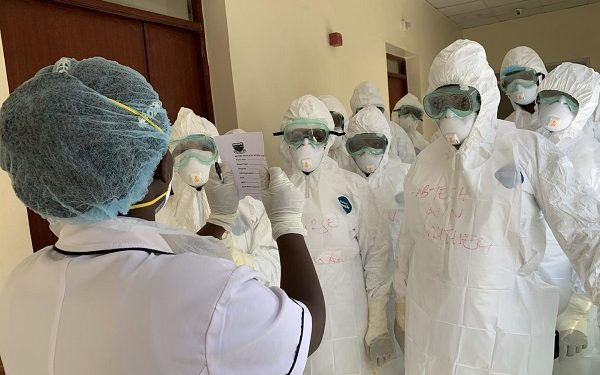 Government has set an amount of GHS80 million to pay frontline health workers their 50% special allowance.

According to the Deputy Minister, although the amount has been earmarked, they are yet to receive data of the designated workers.

“In March 2020, the President of the country, Nana Akufo-Addo announced an incentive package for the health sector as part of Ghana’s COVID-19 pandemic preparedness, response package including the special allowance of basic salaries for frontline health workers.”

“I wish to assure the House that adequate provisions have been made for this incentive package with the COVID-19 Alleviation Programme. We’ve put aside approximately GHS80 million for this response. However, the Ministry of Health alongside the Ministry of Finance are together compiling the data and doing the necessary reconciliations especially to determine the particular workers who are qualified for this,” he disclosed.

The President, Nana Akufo-Addo, extended the incentive package for health workers for three more months as they continue to lead the country’s fight against the COVID-19 pandemic.

The President announced these during his 13th national address on Sunday, June 28, 2020.

The President first announced the three-month tax holiday for the health workers at the beginning of April 2020.

Although the tax rebate has been implemented, that of the 50 percent allowance is yet to be carried amid the seeming controversy over the definition and qualification of a frontline health worker.

However, President Akufo-Addo says issues with the packages as earlier announced for the past three months have been resolved with the rollout of the payment plan to begin soon.

“I know the implementation of this directive for the months of April, May and June has been fraught with some challenges, caused, mainly, by the protracted discussions over the definition of who qualifies as “frontline health workers” in this context. I have, however, been assured that they have now been resolved, and payments will be effected from the end of June. I should reiterate that the insurance package for health workers is still in place.”

President Akufo-Addo said the incentives form part of the government’s commitment to ensuring that health workers are supported as they deliver essential services to the populace especially amidst the outbreak of Coronavirus.

“This is, in part, due to the immense dedication and hard work being exhibited by our healthcare workers, who continue to care for those affected by the virus, and for the sick in general.”