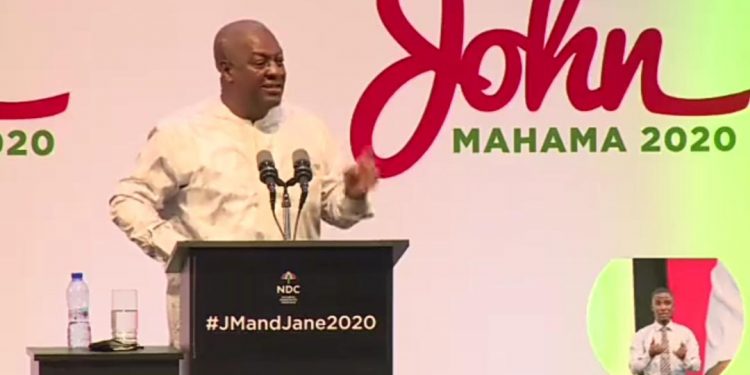 Flagbearer of the National Democratic Congress (NDC), John Dramani Mahama, has promised to pay all persons whose monies have been locked up in following the collapse of some financial institutions in the country.

He said the payments will be made within his first year in office should he be elected President in December 2020.

While delivering his address during a ceremony to outdoor his running mate for the December elections, Mr. Mahama said his government shall implement a payment plan to pay these customers who have been left aggrieved for over a year now.

“I pledge on behalf of the NDC that we shall within one year of being in office pay all funds that have been locked up with the collapsed financial institutions. Within our first year in office, we shall pay all the beneficiaries all funds locked up in the collapsed financial institutions and its a promise. We shall not put together any long term payment plan that will further worsen the living conditions of the victims,” he noted.

He further stated that when the NDC is given the chance to steer the affairs of the nation, he will set up a financial services authority to prevent a repeat of what happened in the Akufo-Addo government.

“As has been introduced in other economies, the NDC will establish a financial services authority that will be responsible for ensuring that consumer financial markets work for consumers and providers and for the economy as a whole. This financial services authority will oversee all financial products and services that are offered to consumers and will effectively and efficiently prevent and stop the challenges that have confronted customers of Menzgold, DKM and others.”

This announcement comes as a reiteration of earlier promises made by the NDC party.

The Securities and Exchange Commission (SEC) also announced the revocation of licenses of 53 Fund Management Companies.

The total estimated cost of the state’s fiscal intervention, excluding interest payments, from 2017 to 2019 was pegged at GHS16.4 billion.

The collapse of the institutions left clients in distress as many of the customers have been struggling to retrieve their savings and investments.