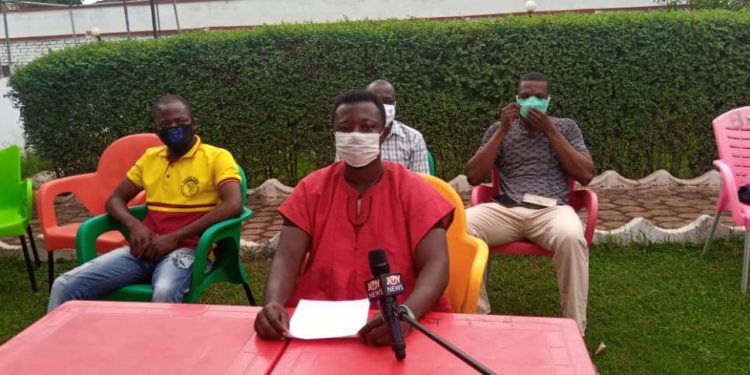 A group calling itself the Coalition of Affected DKM Customers based in the Bono East Region has slammed government for not making provision for them in the mid-year budget review with regards to their locked-up money.

Leaders of the Coalition of Affected DKM Customers addressing a presser at Nkoransa on Monday, July 27, 2020, noted that they have been promised several times that their monies would be paid them but such assurance is yet to materialize.

According to the group, they have made several appeals to the appropriate authorities, but they are not getting any favourable feedback.

They noted that their hopes were dashed last week during the presentation of the mid-year budget review by the Finance Minister when only microfinance companies with challenges from 2017 were captured leaving out those of 2015 which included DKM.

Patrick Adu Baffoe, the Public Relations Officer of the Group addressing the media noted that: “The Mid-Year Budget reading on microfinance was stated for between 2017 and 2020, leaving out 2015, the year DKM suffered its fate. We find the whole thing preposterous to suggest that a registered company under Bank of Ghana’s supervision could drag unsuspecting customers through this harrowing situation under their watch and yet we have to bear the brats. Isn’t 5years enough suffering?”

He also noted that the outbreak of COVID-19 has also compounded their problems and are therefore calling on government for support.

“Your Excellency, we have incessantly suffered the difficulty this DKM fallout left us with since May 11, 2015. We are not slapped by only this, but also, the horrors of the COVID-19 pandemic. You can imagine how deep our wounds are now.”

The then Presidential Candidate of the New Patriotic Party (NPP), Nana Akufo-Addo, promised to launch an investigation into circumstances surrounding the scandal if voted into office during the 2016 election campaign.

He said it was clear that the governing NDC at the time failed to adequately deal with the matter, leading to thousands of Ghanaians losing their monies.

“I will investigate the government’s inability to pay the monies owed as well as investigate the DKM scandal and to ensure that there would be total restoration to all affected in both scandals.”

Thousands of customers of DKM microfinance Company lost their investments running into millions of cedis after the central bank in 2015 suspended the operations of DKM for violating the Banking Act.

Though the central bank subsequently lifted the ban on the company’s operations, DKM was unable to pay its customers their locked up cash.

The Bank of Ghana confiscated the assets of the company and appointed the Registrar General’s Department to commence liquidation processes to refund customers of the company.