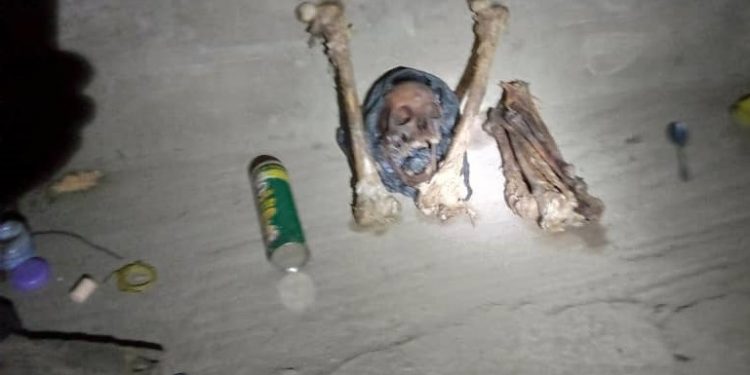 A 20-year-old man, identified as Samuel Asare, is in the grips of the Akosombo Divisional Police Command in the Eastern Region for being in possession of items believed to be human parts.

He was arrested after his father lodged a complaint to the police.

According to a police report, the suspect’s father, Mr Amoako Attah, went to the suspect’s room and found some bones suspected to be human parts.

He then beat him and reported the matter to the police to investigate.

The suspect was subsequently arrested on Tuesday, July 14, 2020, at about 6:00 am by Police at Anum in the Asuogyaman District.

Personnel from the Ghana Police Service together with the complainant went to his house where the suspect’s room was searched.

The Police retrieved decomposed bones said to be human skull, jaw and ribs.

Samuel Asare was arrested and sent to the Police station and later to the Salvation Army Clinic where he was treated, for injuries he sustained from his father’s beatings and discharged.

“I can confirm that the Akosombo Divisional Command is currently investigating a case in which a 20-year-old guy by name Samuel Asare is being investigated for possession of human parts. We just commenced investigations and have not gotten anywhere yet. We expect to update the public when we have some information.”

The police report also said the bones have been sent to the Peki Government hospital morgue for preservation ahead of transfer to the Police hospital for further investigations.

However, the suspect has refused to speak during interrogation.