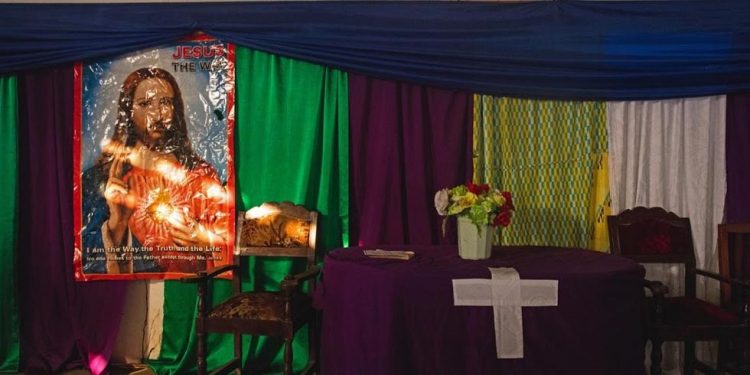 God is having a good laugh up there. He has known, since Adam, that every imagination of the thoughts of the human heart is evil all the time. He looks at the greed, every grubby detail of our ‘clever’ plot to win Election 2020, and laughs.

In 2016, God heard Akufo-Addo shout, “The battle is the Lord’s”, and saw John Mahama point the index finger heavenward, an unspoken acknowledgement that victory belonged to the Lord.
I don’t know everything about God, but I know enough to warn me that when He turns His face against me, my cleverest, most diabolical human scheme comes to nought. Remember the bundles of GHc50 notes in the boot of a car that was stopped and searched at a check-point in the Central Region a few weeks to the 2016 election? The money was on its way to buy votes in the Ashanti Region. God frustrated it.

Today I turn attention to us, the vote sellers. Isn’t it evident by now that after buying our votes, the few hand-me-downs by politicians are only the fortuitous by-product of the very nature of our partisan political arrangement? This arrangement is such that even a JHS student will build toilets, roads and classrooms if (s)he gets voted to power: the World Bank/IMF, African Development Bank, China will bring in the money. Eurobonds, bilateral and multi-lateral loans will always be available for any African leader whose best boast is their ability to borrow.

Apologists of multi-party democracy point at the “vigorous” debates in Parliament. I am not impressed. The hottest debates in African Parliaments are over election-related Constitutional and Executive Instruments and the budget of the Electoral Commission for the next elections. In debates to approve international loan agreements and contracts, the Minority’s concern about value-for-money is born of their suspicion of a bloated grand total which the Majority, either as a whole, or a few among them, will cream off.

I may have forgotten but I cannot remember the last time any NDC/NPP member staged a protest walk-out during debates over science, technology and innovation (STI) budgets, though the whole world knows, and our MPs know, that STI is the only guarantee for the permanent future prosperity of the masses.

As I write, the STI budget is still less than one per cent, contrary to NPP’s promises; and there is no National Science Parks, as promised by NDC.

Like Parliament-like masses. I haven’t read anywhere since 1992, that supporters of any political party hurled insults at or killed/maimed their opponents over a failed STI election promise. Yet we kill or are ready to die at registration centres and on polling day!

By waking up at 2 am (the same time we used to queue at American and British embassies for a visa in the 90s) to mass up at registration centres, regardless of COVID-19, we are declaring that “politics is more important to Ghanaians than life.”

Apparently Akufo-Addo knows what stone his foot is stepping on. I don’t see a killer stone in his hand as he faces his goliath on December 7. That goliath is not his opponent; it is the anger, disenchantment or indifference of the masses.
After such a brilliant start with free SHS, payment of NHIS debts, the massive goodwill and the fantastic performance of his government in the initial handling of the COVID-19 battle, Akufo-Addo seems to have concluded that Election 2020 is a done deal. If infrastructure, alone, were a guarantee of election victory, John Mahama would still be President.

Nor was it for lack of funds that he lost; in terms of the advertising spend in Election 2016, Mahama was on a spree.

The NPP and NDC are almost equally matched in numbers. If I were a politician, my mantra would not be “Fear Delegates”; I’d rather “Respect the Floating Vote”. If I were Akufo-Addo, I would think twice in deciding to send on leave an Auditor General who has won so much respect from the civil society (floating vote) constituency for anti-corruption.
Having handled COVID so well, why is Akufo-Addo now faced with such a daily litany of pleas for PPEs by frustrated health workers?

Why does government think it is right while parents, GNAT, NAGRAT, Concerned Teachers, PTAs, nationwide, and Ghana Medical Association think it is wrong to keep the children in school?

Why, at such a time, must Ursula walk into the media independence minefield – a la communication spectrums and GBC channels? Has she wondered why Kojo Oppong Nkrumah was suddenly absent from the scheduled meeting with Chief Crystal and other stakeholders over the matter?

The daily lamentations are growing louder and difficult to ignore. The battle is still the Lord’s, but on whose side will the Lord fight?