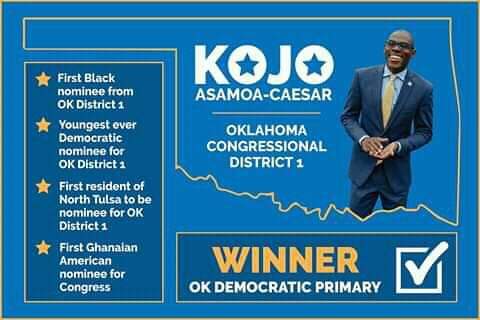 The Head of the Center for Public Discourse Analysis (CPDA), Dr. Etse Sikanku will interview the first Ghanaian-American nominee for the United States of America congress today, Saturday, July 4 at 1 pm.

Kojo Asamoa-Caesar won a primary election on July 1, 2020, against a fellow Democrat, Mark Keeter in order to advance to the November 3 General elections. His opponent in that contest will be incumbent.

This is a historic achievement for several reasons. First, Asamoa-Caesar is the black candidate from his district, the 1st Congressional District of Oklahoma to be nominated for a congressional race.

He is also the youngest candidate from his district.

Another significant thing about his nomination is that he becomes the first Ghanaian American nominee for the United States Congress, a feat which has resonated across the media and public space in America, Ghana and the world.

Kojo’s election is seen as a trailblazing achievement which could inspire many other African-Americans and the black community across the world.

In a period of racial conflict across the United States of America, Kojo’s election is a bright spot.

Asamoa-Caesar is the son of Ghanaian immigrants. His mum worked as a certified nursing assistant while his dad took up a career as a taxi driver.

Etse Sikanku’s Center for Public Discourse Analysis seeks to offer in-depth analysis and engaging conversations on various topical issues nationally and globally. Campaign Analysis Center is one of the CPDA’s flagship programs which offer analytical insights into political campaigns in the United States, Ghana and across the world in order to elevate public discourse.

The interview will be Kojo’s first interview with any Ghanaian personality from his native home, Ghana.

Just like Barack Obama’s election resonated with many blacks across the world, Kojo’s nomination is sure to spark interest in Ghana, Africa, the African-American community and across the world.

The interview will be held at 1 pm Ghana time and 8 am Central time in the US on the Facebook page, “Dr Etse Sikanku”.