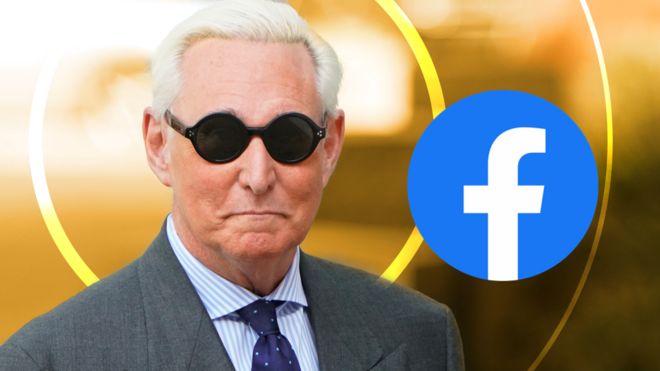 Facebook has removed a disinformation network it says was linked to “Roger Stone and his associates”.

Mr Stone was a long-time political strategist and is an ally of US President Donald Trump. He was convicted of lying to Congress in 2019.

He has denied involvement with the misinformation network.

Facebook also said it had identified a network of fake accounts run by employees of Brazilian President Jair Bolsonaro’s government.

The social network released details of four misinformation campaigns ahead of the July edition of its monthly report on co-ordinated inauthentic behaviour.

“Campaigns like these raise a particularly complex challenge by blurring the line between healthy public debate and manipulation,” Facebook said.

Facebook said it had removed 54 accounts, 50 pages, and four Instagram accounts it had linked to Mr Stone.

About 260,000 accounts followed one or more of the Facebook pages.

The inauthentic pages posted about Mr Stone’s websites, books, and media appearances; local politics; and material leaked by Wikileaks ahead of the US 2016 election.

Meanwhile, the fake profiles posed as Florida residents and commented on the posts to make them look more popular.

In total, those behind the pages spent about $308,000 on Facebook advertising.

Facebook said several of the inauthentic pages had links to Proud Boys, a white-supremacist hate group it had banned in 2018.

“Roger Stone’s personal accounts and his branded assets will be coming down as part of this network,” said Nathaniel Gleicher, Facebook’s head of cyber-security policy. “We saw them deeply enmeshed in the activities here.”