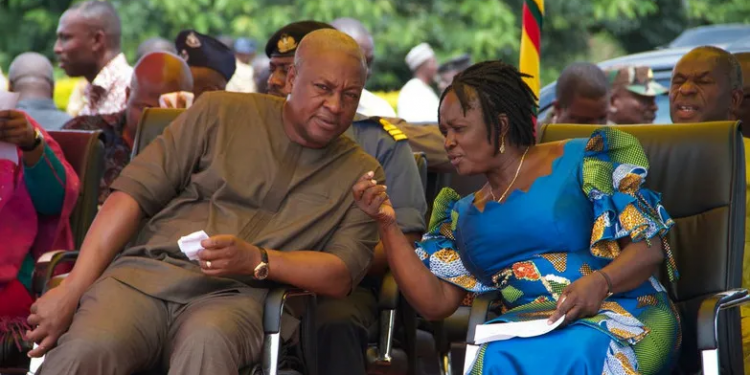 This is not a textbook. It seems the NDC has a clear vision and a thing for challenging societal structures!

A while ago, I made my first appearance at the Centre for Public Discourse Analysis ( CPDA) hosted by  CEO and Political Communications Expert, Dr Etse Sikanku, to discuss what this avant-garde move by the NDC means when it chose Professor Jane Naana Opoku Agyemang as the first female running mate for the party ahead of the 2020 elections: I share few points in this brief (10):

First, the candidature of the former president, John Mahama, keeps evolving at every phase of his career as a politician. This is one of those. He did that with what many call a game-changer choice by swerving the obvious which had been planned for by his opponents.

Second,  this is like a  reunion between  Prof Mills of blessed memory and John Mahama who served under his leadership as a Vice and later President after the former’s demise. I’ve held the view that it shall take academics to change some major aspects of our politicking. There are a bit more conservative in discipline and quick to express frustration in our systems.

Third, one can read John Mahama like a book by this nomination. He’s trying to indicate to the electorates that EDUCATION and GENDER  EMPOWERMENT should be among the top threes that should attract their votes going into 2020 Elections.

Fourth, though the NDC says it wouldn’t consider Bawumia as its benchmark for choosing its running mate, it ended up doing so consciously or unconsciously, but the added even more energizing perspective when they decided to go for a Professor, an accomplished scholar and a human rights activist.

Sixth, this move is a big win for global female empowerment and the excitement is strong among Ghanaian voters.

Seventh, the weaknesses of the nominee are those of any academics who aren’t exposed to politics. But that is always manageable with a solid team.

Eighth, the debate of the nominee not being energizing and a firebrand for the trail is legit. But I fear she might have a lioness hiding inside of her – watching closely some of her communications, she looks the opposite of as she appears.

Ninth, The nominee may not “have a base within the political establishment”. But who makes up the political sphere? The People and the people are also those in academia,  in fact, some very influential voters are found here. Did you have a feel of the atmosphere among students responding to her selection?

Also what is a more “base” than the majority of the Ghanaian population ( about 52% of females) who from my observations,  many, mostly neutrals, were engrossed in the electrifying euphoria.

More so, the mistake some analysts commit is that they forget every serious party has a good structure which reaches all the way to the grassroots. This structure has “grassroots faces” at the bottom and they connect a nominee like a running mate to the people (locals). This will be a fight her party must wage for her with her complementary efforts. Unlikable names have become likeable because of the structures put in place within and outside societies.

Tenth, I’m convinced this is not a gamble, it looks very informed with impressive dynamics and analysis. The challenge now should be the creation of a solid management team to handle this nominee who must fit effortlessly into the warfare politics of 2020 but with her own unique style and value propositions.

If you ask me the NDC has turned the entire country upside down. The news alone has spread like bushfire into the grassroots.

But will the Ghanaian women or young adults of voting age see the new wind and vote for their own who obviously is a colossus representation of women and their wish to reach the apex of leadership?

To help us best understand, this choice by the NDC and its prospect for the future of leadership in Ghana can be likened to the politicking style of the late president of the Republic, John Evans Fiifi Atta Mills.

The author, Kabu Nartey, is the GJA Student Journalist of the Year; a Political Communications Strategist and a Kufuor Scholars Fellow.

What is more important, political gain or economic gain? [Article]