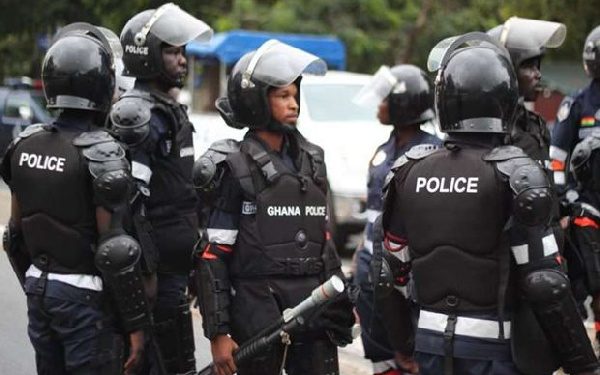 There was heavy military and police presence at the Odukpong Ofaakor Junior High School registration centre at Kasoa on Thursday, July 2, 2020, after gunshots were fired the previous day by some individuals suspected to have come from the camp of the New Patriotic Party (NPP) in Awutu Senya East.

This was after an altercation ensued between the NPP and the opposition National Democratic Congress (NDC).

A party agent belonging to the NDC, Agbotei Ebenezer was allegedly hit by a stone on the head and was admitted at the hospital.

Citi News’ Central Regional Correspondent, Calvis Tetteh reported that “the NPP is alleging that one individual from the NDC camp fired the gunshot. Some individuals quickly had to run for their lives. But I spoke to the individual who was at the centre of the attraction and was hit with a stone on the head. He is an NDC party agent and then he told me that it was one NPP supporter who hit him with the stone because he was trying to prevent him from jumping the queue. When I got to the centre, I could count about six military officers and two police officers who were there to provide security.”

The electoral process was disrupted after the incident as some individuals who had queued to get registered had to run for cover.

There was a similar incident of violence at Adam Nana and Lamptey Mills registration centres.

Parliamentary Candidate for the NPP,  Naa Koryor Okunnor called on the police to investigate the incident and bring the perpetrators to book adding that such incidence must not be encouraged.

Meanwhile, Divisional Police Commander for Kasoa, Charles Koosono said he had no knowledge of the shooting incident at the registration centre.

He, however, said it was rather an assault case that has rather been lodged at his office.