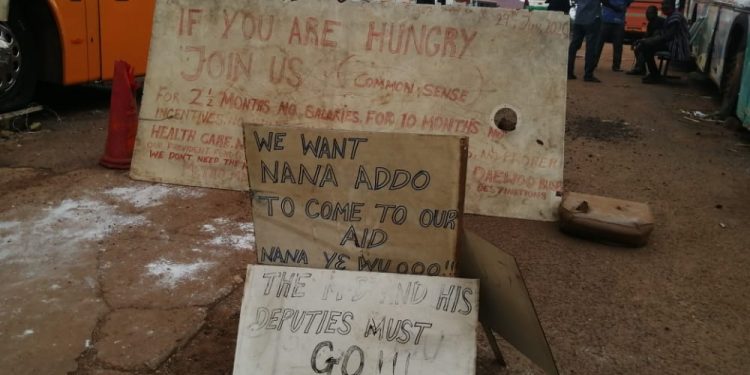 The Ashanti Regional Coordinating Council has directed workers of the Kumasi Depot of the Metro Mass Transit to return to work as it takes steps to get management address their concerns.

This was after a meeting with the leadership of the workers union and management of the company over issues relating to conditions of service.

The workers laid down their tools for the second time to protest unpaid salaries which have been in arrears for three months.

The Ashanti Regional Minister, Simon Osei Mensah after meeting the management of the company, the leadership of the workers union and the Labour Commission appealed to the workers to go back to work.

The Minister directed the Labour Department, the Labour Commission and the Trades Union Congress to look into other concerns raised by the workers.

He also asked management to reinstate the interdicted local chapter Chairman of the Junior Staff Association who was investigated for allegedly inciting workers.

“The meeting is about the current situation about the Metro Mass drivers in Kumasi. The Regional Minister invited us for a discussion and at the end of the day, we came to the conclusion that the workers must return to work while management also does their part that has been assigned. As a matter of fact, the workers have to return because although the government assurance has not been fulfilled, sitting down without working will also cause a lot of revenue shortage. So they have to go back so we see the best way to solve it.”

Workers of Metro Mass Transit Limited have in the last few months embarked on various protests to impress upon their employers to pay them their salaries that are in arrears.

The workers after calling off the action following a meeting with some management members say their demands are yet to be met.

The drivers have abandoned buses that were supposed to commute passengers to destinations outside Kumasi and the Ashanti Region.

In most instances, the protests are called off after negotiations and assurances that they will soon be paid.

Last week, the General Transport, Petroleum and Chemical Workers Union of TUC (Ghana) directed the workers to call off their strike after a successful meeting they had with the leadership of the company where they were given assurances that the striking workers will be paid.

The National Secretariat of the union in its directive said it was convinced that the salaries in arrears would be paid by the government after meeting with management.