My nomination has energized many to vote – Jane Opoku-Agyemang 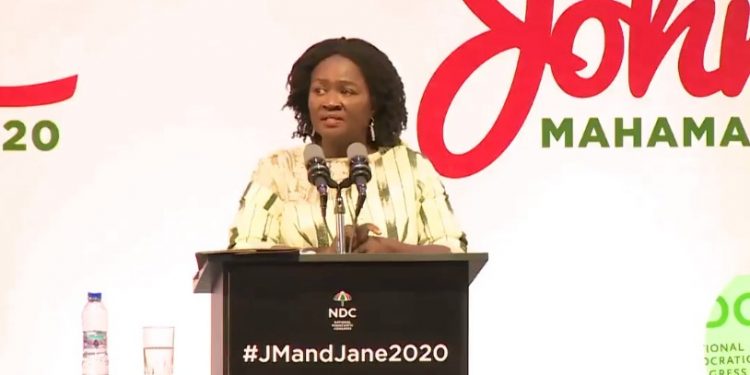 Professor Naana Jane Opoku-Agyemang says many Ghanaians who did not intend to vote in the 2020 general elections have been energized to do so following her nomination as the running mate to flagbearer of the National Democratic Congress (NDC), John Dramani Mahama.

She says such Ghanaians must endeavour to vote in the upcoming polls and vote for the NDC because “we do not intend to disappoint you.”

Delivering her first public address at her unveiling ceremony in Accra, the former Education Minister said her nomination has given women and other groups the chance to make their dreams come true.

“Many are those who are now more energized to vote, thanks to the momentous decision of JM. I urge them to do just that.  We do not intend to disappoint you,” she said.

She added that “JM [John Mahama], by your choice, you have turned the struggles of so many women who have come before this moment into a probability. We- men, women, our youth and children- we all have a chance to finally make real our dreams of serving this country at high levels, of removing doubts and proving once again that we are capable.”

Naana Jane Opoku-Agyemang, who is partnering former President John Mahama into the 2020 elections, said her choice, is an “act of faith” which she does not take lightly and will commit to the responsibilities of working for the benefit of Ghanaians.”

She said she will particularly work to ensure that the “voices and concerns of our children, our youth and our aged, and our persons with disabilities are reflected in critical decisions.”

Born on 22 November 1951 in Cape Coast, Ghana, Naana Jane Opoku-Agyemang attended Anglican Girls’ Secondary School at Koforidua and Aburi Presby Girls’ School. She then had her secondary education at the Wesley Girls High School in Cape Coast from 1964 to 1971.

She completed B.Ed.(Hons) in English and French at the University of Cape Coast in 1977 and obtained her Masters and Doctorate degrees from York University in Toronto, Ontario, Canada in 1980 and 1986 respectively.

Professor Opoku-Agyemang taught and worked at the University of Cape Coast, starting in 1986.

From 1997, she has held the position of Academic Director of the School for International Training in the History and Cultures of the African Diaspora. From 2008-2012 she was the University’s Vice Chancellor.

In October 2009, she was elected Ghana’s representative to the Executive Board of the United Nations Educational, Scientific and Cultural Organisation (UNESCO).

Ahead of the 2012 general elections, Jane Opoku Agyemang moderated the debate with Kojo Oppong Nkrumah.

Between February 2013 and January 2017 she served as the Education Minister of Ghana. On 26 October 2018, she became the Chancellor of the Women’s University in Africa located in Zimbabwe.

She has served on many local and international boards and committees such as the Centre for Democratic Governance, (CDD-Ghana), the Editorial Board of The Harriet Tubman Series on the African Diaspora (Africa World Press Inc. USA), the Africa Initiative in Canada, and the College of Physicians and Surgeons as Eminent Citizen.