A former Minister of Gender, Children and Social Protection, Nana Oye Lithur has slammed the governing New Patriotic Party (NPP) for what she describes as its unnecessary attacks on the newly-selected running mate for the National Democratic Congress’ Presidential Candidate, John Dramani Mahama.

Mr. Mahama’s announcement of a former Education Minister, Prof. Naana Jane Opoku-Agyemang as his running mate for the 2020 general elections has been met with strong criticisms from the NPP who have raised doubt over her credibility and integrity.

Officials of the NPP had argued that John Mahama’s decision to settle on Madam Opoku-Agyemang is enough proof that he does not take the ordinary Ghanaian seriously because she poses a serious danger to the country’s progress.

The NPP, among other things, cited the cancellation of the teacher trainee allowance, freeze on education sector employment and her signing of the petition to have the Montie trio released as some of the decisions that ultimately make her unfit for the new role.

But Nana Oye Lithur who served under the Mahama-government has hit hard at the critics describing their commentary as one that lacks substance given Naana Opoku-Agyemang’s enviable past records as an educationist and Minister.

“In terms of spurious, unwarranted, indefensible comments that the NPP has made, I am quite disappointed that they couldn’t have come up with anything better. The NPP government is seeking to reduce governance and quality of education to the absence of chalk in a single school out of the tens of thousands of schools in Ghana. So we say this is just deflating. If you read in between the lines, there is not much in terms of substance. They had to object so they are objecting,” she said.

She continued by touting some of the achievements of the newly elected running mate insisting that “If you look at the facts and figures and the record on the ground, Prof. Jane Naana Opoku-Agyemang distributed thousands of boxes of chalk. And in this age where we are talking about IT, where many schools have even done away with chalk, should this be one of the major points of the ruling party? Prof. Opoku-Agyemang increased teacher trainee enrolment and even added eight new colleges of education to the Republic of Ghana.”

The Majority Leader, Osei Kyei Mensah Bonsu had raised concerns over what value the Prof. Naana Jane Opoku-Agyemang brings to the NDC ticket.

According to him, although the running mate has a good character, she lacks the required qualities to improve the chances for candidate John Dramani Mahama in the 2020 election.

The Suame lawmaker while sharing his view on the issue to the media in Parliament on July 7, 2020, said if former John Mahama wanted a woman, Hanna Tetteh or former Attorney General, Marietta Brew Appiah-Oppong could have been a better option because both have demonstrated some level of competence.

But responding to these claims, Nana Oye Lithur said the Majority Leader’s concerns are misplaced.

“The Majority Leader of Parliament, unfortunately, has to spew out a few words so he is saying something. The evidence is there for us in terms of Prof. Jane Naana Opoku-Agyemang’s achievement as Vice-Chancellor and Minister of Education.  We have looked and assessed her achievement and she is running mate and Vice-Presidential candidate who is a safe pair of hand, committed, results-oriented team leader, humble, God-fearing and resonate with rank and file of the NDC, neutrals, moderates and even the NPP. This tells you what sort of woman we have that John Mahama has selected as his running mate. 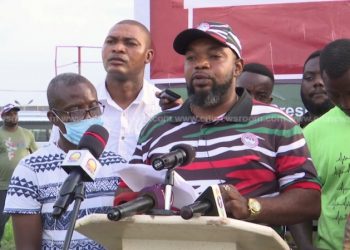