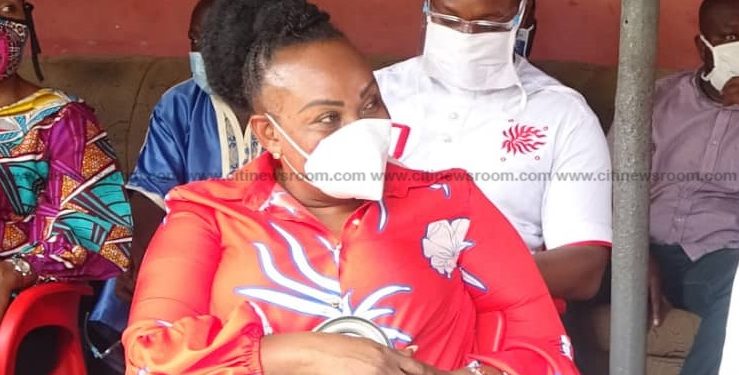 Member of Parliament for Awutu Senya East, Mavis Hawa Koomson, has been interrogated by the Central Regional Command of the Ghana Police Service.

It follows the warning shots Hawa Koomson fired at the Step to Christ centre during the ongoing mass voter registration exercise on Monday, July 20, 2020.

Citi News understands that she was at the Regional Police Command today, Friday, July 24, 2020, following an invitation by the police.

She went to the Police Command in the company of her lawyers where she was taken through her statement.

Police have retrieved the weapon and ammunition together with a license covering the weapon.

Meanwhile, the case docket handed over to the Criminal Investigations Department headquarters in Accra.

Some have also called for her resignation or outright dismissal.

Hawa Koomson, who is also the Minister of Special Development Initiatives, has already admitted to firing the gunshot at the voter registration centre claiming it was in self-defence.

At a press briefing at the National Democratic Congress’ headquarters in Accra, the Director of Elections of the party, Elvis Afriyie Ankrah said Hawa Koomsom and her accomplices should be made to face the law with immediate effect.

“The NDC is totally disgusted by the thuggish and criminal shooting incident involving a gang of NPP thugs who were led by Madam Mavis Hawa Koomson which has received both national and international condemnation and which has been admitted by the Minister of State herself. We condemn in no uncertain terms such thuggery sponsored and led by a high ranking government official and lawmaker who is supposed to uphold the law at all times.”

“Hawa Koomson has by this singular criminal act and the many others committed before and together with her gang and all that they’ve meted out to NDC supporters and innocent Ghanaians in the last couple of weeks demonstrate that she is a gangster who does not deserve to occupy any public position of trust and we join the many voices of conscience in our society to demand her immediate dismissal from office and prosecution for these heinous crimes.”

The NDC has also served notice that it will prosecute Hawa Koomson should John Mahama emerge victorious in the December 2020 general elections if President Akufo-Addo fails to act.

Poor road infrastructure due to government’s incompetence, not COVID-19 – Agbodza