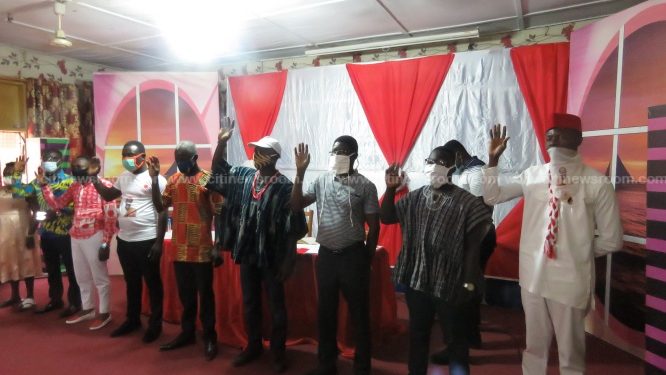 Chairman of the Progressive Peoples’ Party (PPP) in the Bono Regio, Lucious Sanfaa has admonished new executives and members of the party to work hard to promote the party in the region.

Lucious Sanfaa was speaking in Sunyani during the swearing-in of new regional executives of the PPP for the Bono Region.

The swearing was conducted by a representative of the Electoral Commission, Daniels Ofosu Ankamah.

Mr Sanfaa noted that the PPP should not be an election year political party but should be seen at all times in the region.

He said the party has good policies that would cater to the average Ghanaian and therefore admonished the party members to propagate the vision of the party wherever they find themselves.

Mr Safaa said so far the ruling New Patriotic Party (NPP) has disappointed Ghanaians though it campaigned on juicy promises in the run-up to the 2016 elections.

“The NPP in the run-up to the 2016 elections came up with attractive promises, but has not been able to fulfil them. In the area of jobs for the unemployed, they brought on NABCO but under this policy, the SSNIT of the beneficiaries are not paid.”

He noted that the PPP is the best alternative to the NPP and the NDC.

Meanwhile, the Founder of the Party, Dr. Papa Kwesi Nduom, has urged the government to prioritize the health of citizens over the need to conduct elections amid the threat of COVID-19.

The ongoing voter registration exercise has been a point of contention with observers warning it will contribute to a spike in cases of the virus.

Some health professionals in the country have written to the Electoral Commission asking it to pause the ongoing voter registration exercise until safer ways of conducting the exercise are identified to prevent further spread of COVID-19.

But speaking on GN Radio in the UK, Dr. Nduom noted that the December polls are essential to Ghana’s democracy but not at the expense of human lives.

“An election is something that if necessary, we can do without but we cannot do without the human being in Ghana,” he said.

He added: “What will profit anybody to do well in an election and find out that all the people are sick or the people are not doing well and businesses are collapsing and so on and so forth.”

“So we must first take care of the health of the people,” Dr. Nduom stressed.