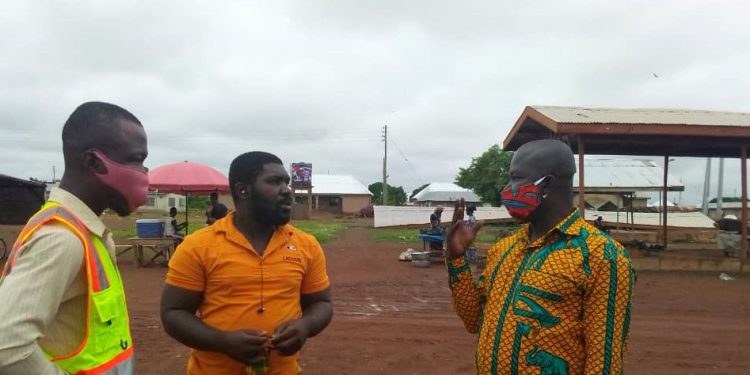 The District Chief Executive (DCE) of Pru East District in the Bono East Region, Joshua Kwaku Abonkrah has disclosed that the district is getting new projects including a new market in Yeji among others under the one million, one constituency program.

Joshua Abonkrah who took the contractors round to the various sites for the projects later in an interview noted that the projects would go a long way to improve the lives of the residents in the district.

“I would like to thank the President Nana Akufo-Addo for fulfilling a promise he made to the people of Pru East District that when he wins power, he would give the district US$1 million for developmental projects. We have received eight projects. I am happy, especially with the street lights because Yeji has been in darkness for long.”

“When President Mahama was in power, he appointed a substantive Power Minister from this constituency, but unfortunately, he could not help with our street lights. I know these street lights would help us especially for those who do businesses at night. Yeji Senior High School is also getting an ultra-modern dining hall.”

Mr. Abonkrah noted that his focus would be on the projects which begin in the next two weeks to ensure that they are completed on the scheduled time.

Amansiah Company Limited would be in charge of street lights in Yeji Township and Kobre to improve upon security in the district capital.

Maibulala Construction Limited would be constructing 100 market stalls at Yeji at the cost of GH475,000.00.

Emmanuel Amankwa, the Chief Executive Officer of Amansiah Company Limited, the company in charge of the construction of 50 market stalls at Parambo disclosed that “the project is supposed to commence in two weeks and we are also expected to complete it before November”.

Frontline Construction Limited is also responsible for the construction of a one-storey dormitory for Yeji Midwifery Training School where construction would begin next week and is expected to be completed in a year.

The project is expected to ease the accommodation challenges of the school.