Sir John was a good man, I’ll miss him – Bawumia 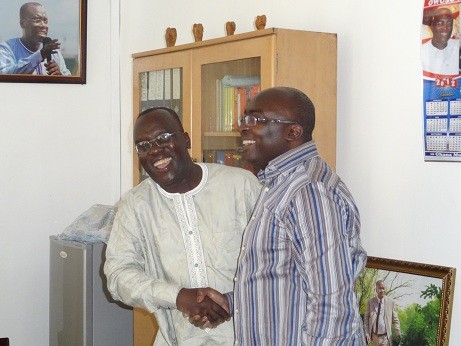 The former party General Secretary died on Wednesday, July 1, 2020, at the Intensive Care Unit of the Korle-Bu Teaching Hospital from COVID-19-related complications.

Bawumia in a tweet hours after the news said he had spoken to Sir John a day earlier and was surprised to learn of his passing on Wednesday.

He described the man who until his death was the Chief Executive Officer of the Forestry Commission as a good man who will be missed.

“My heartfelt condolences to the family of Lawyer Kwadwo Owusu-Afriyie aka Sir John. I spoke with Sir John only yesterday [Tuesday] but little did I know that was our last conversation. Sir John was a good man who truly paid his dues to the Party and Ghana. I will miss him. Rest in peace, my good friend,” Bawumia tweeted. 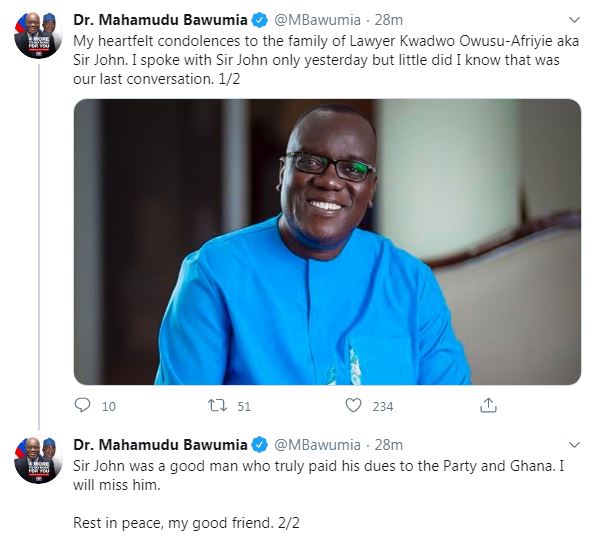 Tributes have been pouring in for Kwadwo Owusu Afriyie.

The Director of Communications at the Presidency, Eugene Arhin posted on Facebook that: “R.I.P Sir John. Till we meet again!!”

A number of NPP officials have also done same on their social media pages.

Kwadwo Afriyie was born in the Ashanti Region of Ghana.

He attended Seventh Day Adventist Secondary School in Bekwai from where he obtained his GCE Ordinary level certificate.

He then proceeded to obtain his GCE Advanced level certificate from Konongo Odumase Secondary School in Konongo.

He was admitted to study political science at the University of Ghana.

He then enrolled at the Ghana School of Law where he graduated with Bachelor of Laws.

After this he was admitted as a solicitor and counsel for the Supreme Court of Ghana.

Afriyie entered into private law practice in 1981. During the John Agyekum Kufour administration, he was appointed head of legal services at the Ghana National Petroleum Corporation.

He was later made to act as the Deputy Chief Executive Officer of the corporation.

While managing his firm, Afriyie was also actively engaged in Ghanaian politics.

He served as the General Secretary of the New Patriotic Party from 2010 to 2014.

He lost his bid to secure a second term to Kwabena Agyapong.

Kwadwo Owusu Afriyie is the second government appointee to have died of COVID-19 in Ghana.

The first was Mayor of the Sekondi-Takoradi Metropolitan Assembly, K.K. Sam.