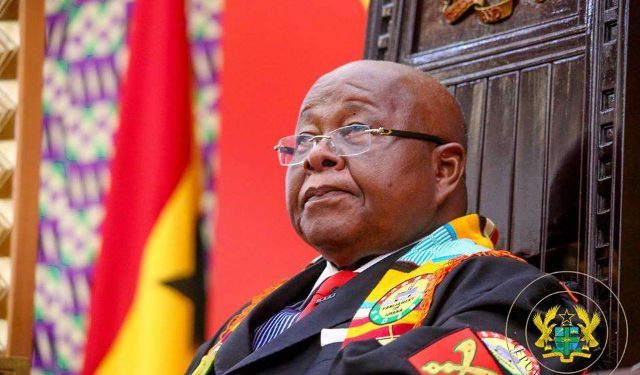 The Speaker of Parliament, Professor Mike Oquaye, is threatening to sanction auxiliary staff of Parliament who are not abiding by the protocols for the prevention of COVID-19.

According to the Speaker, he will not countenance such behaviour from the staff.

The Speaker was speaking on the Floor about the latest measures taken by the House to deal with the spread of coronavirus.

“Honorable Members, this is the last warning. If any person is engaged on a temporary basis by way of research assistant and all those who have been asked to stay at home and work electronically is seen within the parameters of Parliament, that person will be disciplined immediately,” he warned.

Prof. Oquaye further stressed that “when that happens, no one should come and plead for anyone.”

“That will mean breaking the rules. Let us also remember that if you see any stranger on the Floor and you accommodate and tolerate that kind of thing, you are helping the spread of the virus. So let’s keep human traffic clean and do all we can as much as possible. Parliament is not like any other place that you can have suspended or closed down,” he said.

The Majority Leader in Parliament, Osei Kyei-Mensah-Bonsu previously had cause expressed concern over the rate at which some persons with COVID-19 were still mingling with others.

He observed that the conduct of such persons endangered other persons who still report to Parliament each day to work.

He noted that despite the advice of the medical team for the affected MPs, Parliamentary staff and journalists to stay away, they are still being seen in Parliament.

The Majority Leader indicated that the medical team is frustrated by the act of some of the affected people.

‘Parliament won’t be shut down because of coronavirus’

Despite these concerns, there are no indications that Parliament will shut down.

“The House will not shut down. Business will have to continue,” Mr. Nyindam insisted to the media.

He suggested that observing the safety protocols would be enough to ensure MPs and staffers are safe.