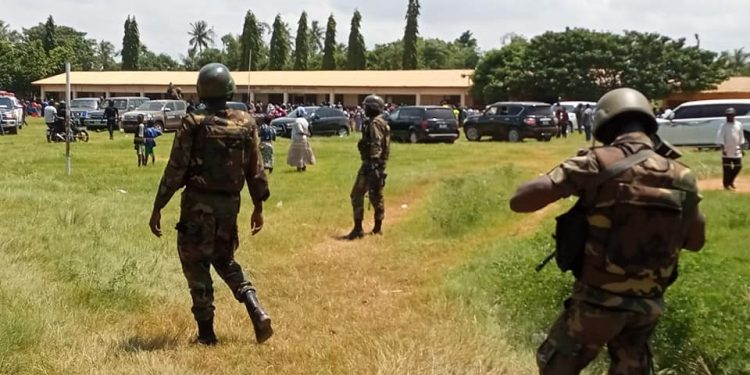 The Chief Executive of the Ketu South Municipal Assembly, Elliot Edem Agbenowu says claims that the Volta Regional Minister, Archibald Letsa visited the municipality on Wednesday in the company of dozens of military officers to intimidate registrants in the ongoing voter registration exercise are false.

Speaking on Eyewitness News, he said Mr. Letsa was instead in the company of some top security officials within the municipality and some members of the Regional Security Council.

On Tuesday [July 29, 2020] there were claims on social media that several armed military personnel had been brought into the municipality which shares a border with Togo by the Regional Minister as part of efforts to discourage residents who have consistently voted for the opposition National Democratic Congress (NDC) in national elections from registering for their voters’ ID card.

The claims came with photos that showed some armed military personnel at an open field which served as a registration centre.

Other social media posts said the Minister came with a convoy of dozens of 4×4 vehicles occupied mostly by the security personnel.

Reacting to the claims the MCE said, “that cannot be true. It is not possible.”

The MCE, Elliot Agbenowu told Umaru Sanda Amadu on Eyewitness News that the Minister was not on any planned mission to deploy armed personnel in the municipality.

He said the Minister visited with just about seven vehicles which were occupied by members of the Regional Security Council.

“The Regional Minister came with some REGSEC members. He came with the Regional Immigration Commander and National Security Liaison officer and some members of the media. He also came with members of the Volta Regional Coordinating Council. Over here it was my Divisional Commander and the Crime Officer who are able to join the tour. It was a surprise visit even to me. It wasn’t anything that was planned for me to even arrange the security council for the minister to address. He came, got the briefing and decided to just go and look at a few [registrationccentres]….It was about 7 vehicles [he was with],” he said.

Commenting on the ongoing voter registration exercise in the municipality, Elliot Agbenowu said while the process was generally smooth and peaceful, there were a few registration centres where some incidents were reported.

“He [Regional Minister] was so much impressed about how things are moving except the few places we went where there seemed to be some challenges.”

My support for Montie Three not an endorsement of their actions – Prof. Opoku-Agyemang

My support for Montie Three not an endorsement of their actions - Prof. Opoku-Agyemang