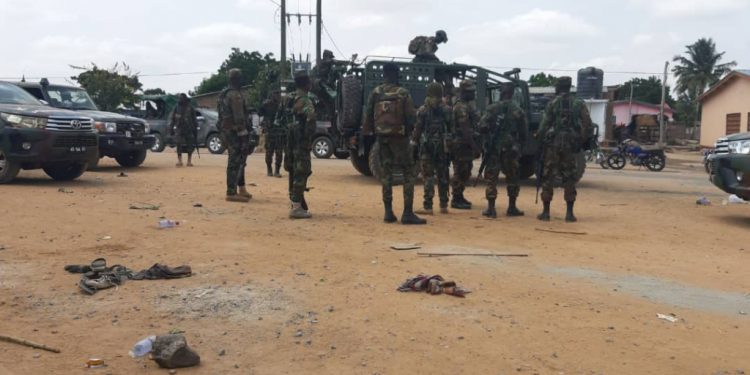 Over one hundred residents of Dome Faase in the Obom Domeabra constituency who were rounded up by the military over land boundary-related clashes have been released.

Their release followed a request by the elders of the community.

The elders made the request during a meeting with the Greater Accra Regional Minister, Ishmael Ashitey, yesterday, Friday, August 28, 2020.

Hundreds of fear-stricken residents fled the town on Tuesday, August 26, 2020, after clashes on Monday that saw two soldiers being brutalized.

Some residents told Citi News that military personnel deployed to the area went from one house to the other, demanding to see the men in the house.

Some residents also accused the military personnel of ransacking their rooms.

The Omankrado of the Obom Domeabra traditional area, Nii Ado speaking to Citi News on the latest development said: “Yesterday we had another meeting with the Regional Minister, the Mayor Accra and the Ga Mantse and others and the meeting concluded that all the military men should leave the area and also promised us that all the people arrested were going to be released and today all of them have been released.”

Meanwhile, the Domeabra Obom Youth Association (DOYA) has called for the immediate arrest of the Mponuahene of Akyem Apedwa for allegedly causing the chaos recently experienced in Dome Faase.

According to the group, the attempt by the chief to illegally claim lands not belonging to him using the military to intimidate others and cause confusion, saw residents fleeing the area.

The President of DOYA, Emmanuel Nii Okai Armah at a press conference said a full-scale investigation must be conducted by the country’s security agencies.

“Mponuahene has the support of government to engage in this roundly condemnable conduct. Domeabra Obom constituency was peaceful until he decided to ride at the back of coercive apparatus of State to harass constituents.”