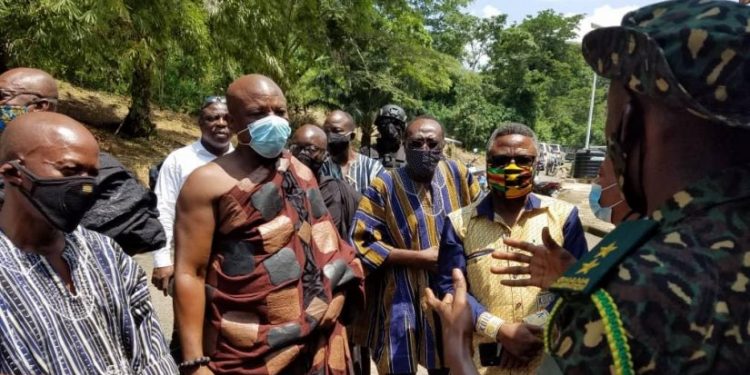 Togbe Afede XIV, President of the National House of Chiefs, has called for a human face approach to the border closure to mitigate livelihoods of communities at the frontiers.

He said the “benefit of nationality” has eluded residents of border communities requesting for mitigating approaches.

Togbe Afede, doubling as the Agbogbomefia of Asogli State, said these, when he led the Standing Committee of the Volta Regional House of Chiefs to tour Leklebi-Kame border community in the Afadzato South District and others in Ho Municipality and Ketu South and engaged with immigration officials.

He said the situation was “worse than expected,” as it affected access to basic facilities in the country for those caught on the cross borderline.

He said the siting of immigration posts away from the actual border lines affected communities on the frontier, and that efforts to secure the nation’s borders must not hinder the livelihoods of cross border residents.

“It’s a blanket suggestion that you cannot cross the checkpoint when you know that Ghana lies beyond that checkpoint. How do parents explain to their children that we are no more Ghanaian? Suddenly you cannot come to your own country. Can you imagine the psychological trauma?” Togbe Afede asked.

The post at Leklebi Kame is several hundred meters away from the actual border post, and officials of the Ghana Immigration Service there told the Committee that the President’s directives prevented Ghanaians living beyond the post from crossing, and they had made several arrests.

“The place is calm. There are no crossings, no one dares,” one official said, and confirmed that people from beyond the post, who were schooling in Ghana too had been denied passage.

He said the location created challenges and threatened their peaceful coexistence with residents, and suggested that the post be moved closer to the border.

Togbuiga Delume VII, Paramount Chief of Ve Traditional Area, said there had been no reports of harassments by security personnel there since their deployment.

Mr Thomas Alutornu, Secretary to the Hornuta Traditional Council in the Ho West District reported to the Committee that military personnel deployed to the area, few days later started breaking into homes, and also arrested some residents they claimed were Togolese seeking to register.

He said the people lived in fear as they were “surrounded by security personnel” until the voter registration process was done with.

“They were turning people away, yet we share a common boundary with Togo and we share the same culture,” Mr Alutornu said, adding that it was wrong to claim that people of frontier communities were not Ghanaians.

He, however, noted that no violence had been recorded, although some local vigilantes had also committed to helping keep out non-Ghanaians.

Togbe Afede called for peace and unity, and said the chieftaincy institution supported peaceful conduct of the elections, and would continue to work towards its success.

The Committee visited border communities in the Ho Municipality, and also major entry points in the Ketu South Municipality, asking border officials to continue to sympathize with the people.

The Committee also toured the several security posts manned by military and immigration officers, which Togbe Fiti pointed out were placed on a line wrongly sited by the Togolese Authorities and called for the “redemarcation” of Aflao lands.