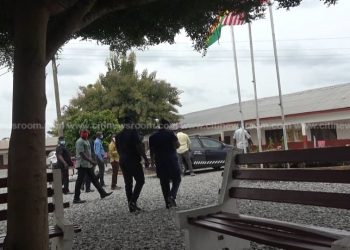 Bright Senior High School in Kukurantumi in the Eastern Region has described as untruthful, a statement from the Akyem Abuakwa Traditional Council regarding the conduct of examinations in the school over the past decade.

The statement from the Council called for the immediate closure of the school following recent acts of assault attributed to students during the 2020 West African Senior School Certificate Examination (WASSCE).

The Council’s Secretary, D. M. Ofori-Atta on Eyewitness News also accused the school of charging exorbitant fees and finding every means possible to help its students to pass the WASSCE.

But responding to the claims on Eyewitness News, the Public Relations Officer of the Bright SHS, Isaac Asare indicated that the concerns of the Council were mere allegations.

“These are false statements. They are allegations levelled against us. To me, I don’t see any truth in whatever they are saying. They are entitled to their opinions, so we will leave it that way. Let Ghana judge. Those who know Bright School know what the school stands for. The school started from humble beginnings and by the Grace of God, it has reached this stage.”

Isaac Asare further urged Ghanaians to desist from making allegations and derogatory comments against the school and its proprietor for the wrong reasons.

The Akyem Abuakwa Traditional Council, in its statement, had accused the proprietor of Bright SHS of engaging in “ultra-commercial and profiteering aims which runs against the established interest of the educational policy and integrity of public examination” for over ten years.

The Council said the recent happening at the school “confirms several reports of corrupt and exploitative motives” of the school as this is not the first time the school has allegedly bribed certain WAEC officials and invigilators to supply answers to students in the examination hall.

The Council thus demanded the prosecution of the proprietor.

On August 4, some students of the school reportedly beat up WAEC officials who were invigilating them in the ongoing WASSCE for allegedly tightening security during the exams.

The students also attacked Damolie Emmanuel Pacome, a journalist with the Daily Graphic who was at the school to report on the developments.

Their actions have been met with public condemnation compelling the West African Examinations Council (WAEC) to relocate the examination centre at the school to Ofori Panin Senior High School to “ensure the integrity of the examination and safeguard the lives of examination officials”.

The proprietor of the school, Bright Amponsah, who is believed to have incited the candidates to attack the WAEC officials was arrested and later charged with abetment of crime to wit assault, assault and causing damage after being granted bail.