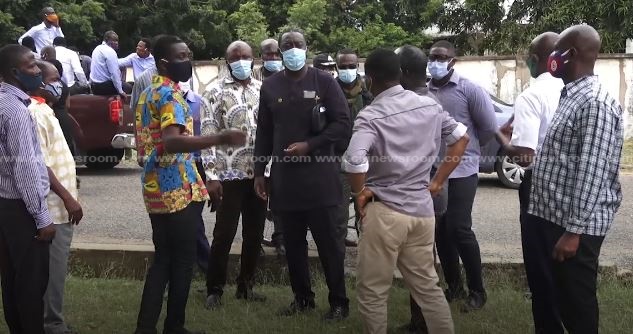 Workers of the Council for Scientific and Industrial Research (CSIR) have protested the demolition of some of their bungalows located at Labone in Accra.

According to the staff, the exercise was being embarked upon by some private developers who claim to have been authorized by the Lands Commission.

Workers of the council on Monday, August 31, 2020, massed up at some of their bungalows to register their displeasure against an unknown private developer who was demolishing the structures inhabited by some of their co-workers with assistance from some security officers.

Speaking to Citi News during the demolition of the structures, some of the workers say they are unhappy with the exercise.

“About two weeks ago, some people came here and banged into our house to paste some notices claiming that it was from Lands Commission. So we spoke to our CSIR Director to come and secure the place. So they did that but on Sunday when we came back from church, they had broken into the walls that were there to protect the land and this Monday, we saw this bulldozer coming to break the houses with its occupants down,” one resident said.

Some of the workers were clad in red armbands as a protest against the demolition of the bungalows.

State officials and some security personnel were called upon to the scene to ascertain the situation.

The police upon arrival halted the exercise.

The Trade Union Congress of CSIR says it will not relent on its efforts in ensuring the situation is resolved.

“We do not know where they had the authorization from. They claim they bought the land from Osu stool and that is where they had the lease from but they have not shown it to us through Lands Commission. The property doesn’t belong to them and so we have put security officers around to prevent them from taking the land so we get the lease properly from them”, Michael Amo-Gyasi, Chairman of the CSIR TUC noted.

The Council for Scientific and Industrial Research was established to organize and coordinate scientific research in Ghana.

It is also mandated to pursue the implementation of policies of the government in relation to scientific research and development and advice the sector Minister on scientific and technological advances likely to be of importance to national development.