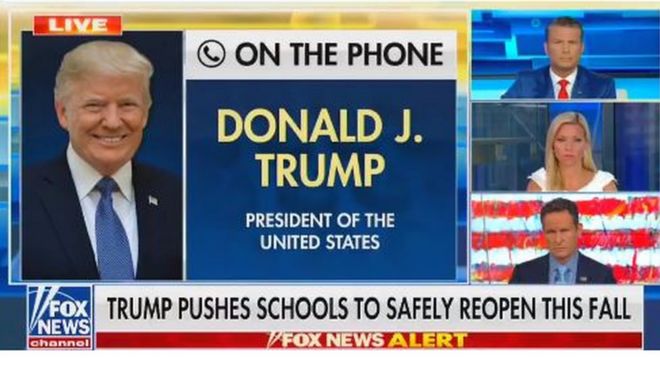 Facebook and Twitter have penalised Donald Trump and his campaign for posts in which the president claimed children were “almost immune” to coronavirus.

US public health advice makes clear children have no immunity to Covid-19.

A Facebook spokesperson said on Wednesday evening: “This video includes false claims that a group of people is immune from COVID-19 which is a violation of our policies around harmful COVID misinformation.”

It was the first time the social giant had taken action to remove content posted by the president based on its coronavirus-misinformation policy, but not the first time it has penalised Mr Trump over the content on his page.

It later appeared to have been deleted.

“So few, they’ve got stronger, hard to believe, I don’t know how you feel about it, but they’ve got much stronger immune systems than we do somehow for this.

Mr Trump, who is running for re-election in November, also said of coronavirus: “This thing’s going away. It will go away like things go away.”

But in March, Twitter said a tweet by entrepreneur Elon Musk suggesting children are “essentially immune” to coronavirus did not break its rules.

How dangerous is coronavirus for children?

Children can catch and transmit the virus, but they run an extremely low risk of becoming ill from it.

Adults – and particularly older adults – are far more likely to be seriously ill and die from complications.

The largest study done so far, involving more than 55,000 hospital patients, found that only 0.8% were under the age of 19.

Half of all the people with confirmed coronavirus who were admitted to critical care units in England, Wales and Northern Ireland were 60 or older as of 31 July, according to a research charity.

A recent US study of coronavirus cases among 7,780 children from 26 countries found almost one in five patients had no symptoms. Another one in five developed lesions on their lungs during the infection.

Some 3.3% were admitted to intensive care units and seven deaths were reported, according to the research from the University of Texas Health Science Center at San Antonio.

A study from the London School of Hygiene and Tropical Medicine found that people under 20 were about half as susceptible to coronavirus infection as those over 20.

There have been some extremely rare cases of children developing an inflammatory syndrome similar to Kawasaki disease, and scientists are exploring a possible delayed immune response to coronavirus.

In June, Facebook said it had removed adverts for President Trump’s re-election campaign that featured a symbol used in Nazi Germany.

The company said the offending ad contained an inverted red triangle similar to that used by the Nazis to label opponents such as communists.

Mr Trump’s campaign team said the far-left activist group antifa uses the symbol and it was a reference to them.

The ads, which were posted on the site on pages belonging to President Trump and Vice-President Mike Pence, were online for about 24 hours and had received hundreds of thousands of views before they were taken down.

Are US schools reopening amid pandemic?
Hundreds of school districts around the country have scrapped plans to reopen as coronavirus infections have spiked in a number of US states.

Some 20 of the nation’s largest 25 school districts have announced they will start remotely.

Among the schools that are not reopening is one attended by the president’s son, Barron Trump, in suburban Maryland.

St Andrew’s Episcopal School said in a letter to parents it would opt instead for virtual learning to protect the health of students, families and staff.

A day later, 260 employees had been told to stay away from their schools because they tested positive for coronavirus, or had been exposed to someone else who had the infection.

One of the first school districts in the nation to reopen, near Indianapolis, Indiana, had a student test positive on the first day.

The child’s parents had sent him to campus, knowing that his test result was pending, school officials said.

Other students who had come within 6ft of the patient for more than 15 minutes were sent home to self-isolate for 14 days.

China ramps up testing to 4.8 million tests per day