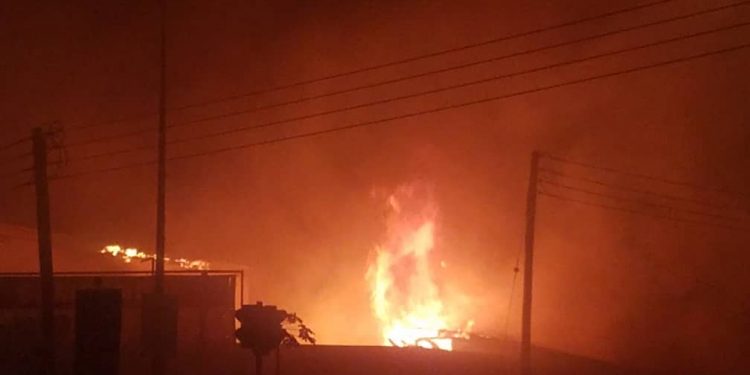 A fire outbreak which started around 12:30 am on Saturday, 15th August 2020 on the Kingston Avenue at the Takoradi Market Circle has destroyed about five stores.

First Samuel, a popular provision shop at the market was also affected by the inferno.

The Public Relations Officer of the Western Regional Fire Service, DO3 Emma Bonney told Citi News several groceries were destroyed in the fire-outbreak which took five hours before it was finally put under control.

He said they deployed about seven fire tenders before they were able to bring the inferno under control.

“This morning around 12:32 am, we received a distress call from our market circle branch that there was a fire outbreak. Within five minutes, we mobilized and came to the scene and saw about four stores in flames. So we quickly organised other fire tenders to assist in fighting the fire. We fought the fire within five hours. When we came, there were highly combustible materials in the building so we had to contain the fire in the building so that it does not spread”, he said.

Meanwhile, the Western Regional Minister, Kwabena Okyere Darko Mensah visited the scene and assured the affected persons that their Insurers would immediately come to their aid.

“I have spoken to the store owners some of whom have insurance. So I believe that when the insurance companies come, they will pay them early so they get back to business so that the employment that they generate over the years can also be maintained.”

This incident comes barely a day after fire destroyed a number of structures at a kiosk estate at Shiashie in Accra.

Part of the Electoral Commission’s Greater Accra Regional office was also gutted by fire on Friday.