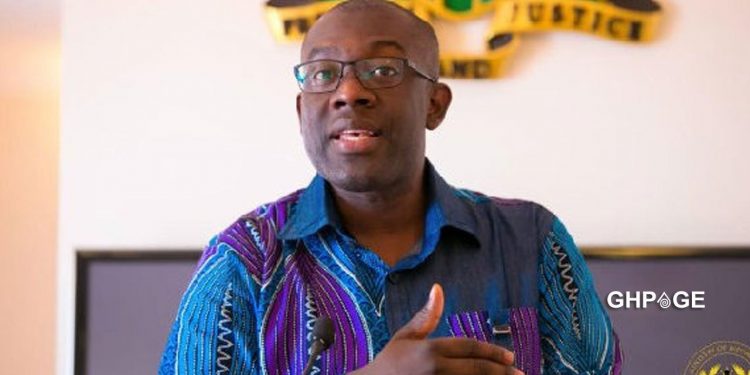 Information Minister, Kojo Oppong Nkrumah has said that government has been very transparent in all transactions regarding the Agyapa Mineral Royalties deal.

His comments come on the back of calls by some 15 Civil Society Organizations (CSOs) under the umbrella name Alliance of CSOs working on Extractive, Anti-Corruption and Good Governance for the immediate suspension of the implementation of the controversial Special Purpose Vehicle, Agyapa Royalties Limited established by the government through the Minerals Income Investment Fund.

The CSOs say until there is full disclosure of the beneficial owners of the Special Purpose Vehicle, Agyapa Minerals Royalties, the implementation of the deal should be deferred.

But speaking on Eyewitness News, the Ofoase-Ayirebi legislator argued that government has no intention to hide any information from the public.

He further stated that it was unfair for the CSOs to demand the suspension of the deal.

“There is nothing wrong with our friends in civil society saying that they don’t have some information and they will like to have that information. There is absolutely nothing wrong with that. If that is the request, I believe that we are in the position to provide whatever information that they may request. I do not think however that it is proper for our colleagues in civil society to say that until they see some documents, they are calling for a suspension or they will do something else, I don’t think that is how we are running this democracy.”

He urged them to trigger the necessary processes within the Right to Information law to request for information for the deal.

On some allegations that government failed to consult properly before entering into the deal, Mr Oppong indicated that all the necessary consultations were done adding that he does not “think that we should use the word consultation in the context that suggests that when the government is embarking on a particular transaction of this nature, it ought to do some consultation extraordinary than the standard ones.”

He also explained that in 2018, the government introduced the Agyapa Royalties deal into Parliament as the Minerals Income Investment Fund Act where it was debated extensively.

He, however, bemoaned the failure of some individuals to pay heed to the crux of the debate but only paying attention to some comments that were made in jest during the debate.

“We introduced it to Parliament as the Minerals Income Investment Fund Act and it was debated in Parliament extensively; views and memos brought to it. A lot of consultations were done and even amendments were done to the Act itself as a first item. The second item is that when the MIIF was then eventually first set up and opted to do a transaction, all the documentation associated with the structure of that transaction has been made available to Parliament and we have had an extensive debate about it. We have had extensive views sent to us about it.”

“In fact, it was that debate that brought this whole ‘papa no’ matter in Parliament on the very final day. Unfortunately, a lot of people did not pay attention to the main debate. They instead paid attention to the comments made in jest,” he added.

Wi-Fi for SHSs: GES directed to review ban on phones, other gadgets – Adutwum

Wi-Fi for SHSs: GES directed to review ban on phones, other gadgets - Adutwum