Mahama promises to give fishermen direct access to premix fuel 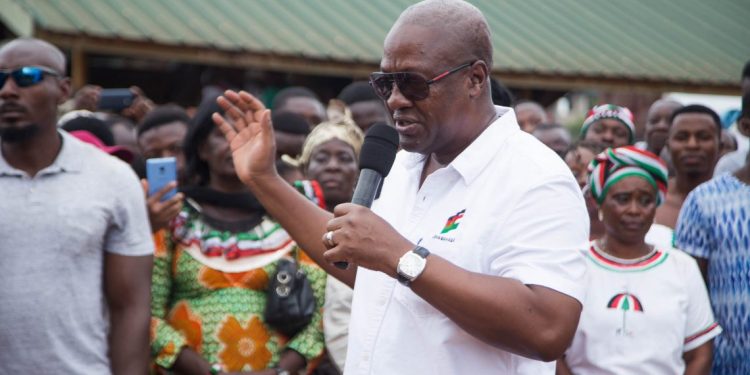 Flagbearer of the National Democratic Congress (NDC), John Dramani Mahama says his government will provide premix fuel directly to fisherfolk for onward distribution among themselves if re-elected.

According to him, the NPP government has mishandled the distribution of premix fuel in the country.

Mr. Mahama accused the NPP of giving the premix fuel to party members who end up selling it off to fisherfolk.

Addressing the people of Chantai in the Oti Region, Mr. Mahama said his government will regulate the sector to allow fisherfolk direct access to premix fuel and also give out outboard motors on credit.

“Since the NPP came into power, the premix fuel is given to party members who are not fishermen, these people will then inflate the prices before selling to fishermen. But we want to assure you that when we return to power, we will regulate the sector to allow fisherfolk direct access to premix fuel for onward distribution among them. If we are re-elected, we will bring back the initiative of giving out outboard motors on credit where you will pay in instalments until payment is done.”

Some fishermen have complained that officials in charge of selling premix fuel sell it mostly to pro-NPP fishermen who hoard the product and sell it to the rest of them at higher prices.

Because of the perennial challenges with premix fuel distribution, Vice President, Dr. Mahamudu Bawumia in July 2019 announced that government had begun processes to digitize the distribution of both premix fuel and fertilizer to address the confusion.

The government is now set to introduce a Canoe Identification Card to curb premix fuel diversion.

Premix fuel will only be distributed to fishermen who have registered their canoes and vessels with the Ministry of Aquaculture, and have been issued with Canoe Identification Cards.

Vice President Dr Mahamudu Bawumia had also disclosed that the distribution of premix fuel to fishermen across the country is to be digitised by the end of August 2019.

He said the move was to improve efficiency in the distribution of the fuel, do away with middlemen who mostly divert the product from reaching intended beneficiaries, and to clamp down on smuggling, which has characterised premix fuel distribution.