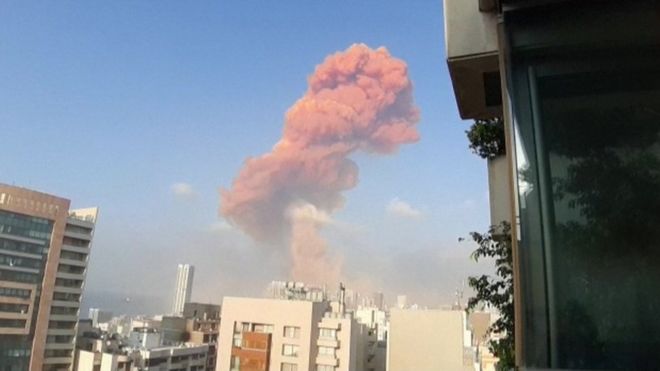 A large blast has hit the Lebanese capital, Beirut, ahead of the verdict in a trial over the killing of ex-PM Rafik Hariri in 2005.

Reports say the explosion was in the port area of the city, with unconfirmed reports of a second blast. It is not clear what caused them.

A UN tribunal is due to issue its verdict in the trial of four suspects in the murder by car bomb of Hariri.

All four are members of the Iranian-backed Hezbollah group, which has consistently denied any role in Hariri’s death. They are being tried in absentia and the verdict is due on Friday.

The possible second explosion was reported to be at the Hariri residence in the city.

Lebanon’s health minister, Hamad Hasan, has spoken of many injuries and extensive damage.

The latest reports come amid political tension in Lebanon, with street demonstrations against the government’s handling the worst economic crisis since the 1975-1990 civil war.

What’s the Hariri case about?

On the morning of 14 February 2005, Rafik Hariri – then an MP who aligned himself with the opposition in parliament – was travelling in a motorcade when the explosion went off in a busy area full of hotels and banks, causing widespread damage.

Mr Hariri had been one of Lebanon’s most prominent Sunni politicians and, at the time of his death, had joined calls for Syria to withdraw troops which had been in Lebanon since 1976 following the start of the civil war.

The killing brought tens of thousands of demonstrators on to the streets in protest against the pro-Syrian government, with the finger of blame for the assassination pointed at Lebanon’s heavily influential neighbour.

Within two weeks the government resigned and weeks after that, Syria withdrew its forces.

After collecting evidence, the UN and Lebanon set up the Special Tribunal for Lebanon (STL) in The Hague in 2007 to investigate the bombing, and ultimately charged the four suspects with terrorism, murder and attempted murder.

A fifth man linked to the attack, Hezbollah military commander Mustafa Amine Badreddine, was killed in Syria in 2016.

Hezbollah’s supporters have dismissed the trial, suggesting that the STL process is not politically neutral.