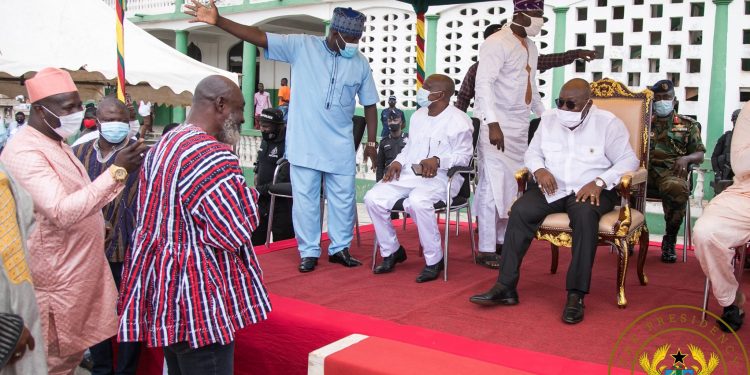 President Addo Dankwa Akufo-Addo has called on inhabitants of Zongo communities to vote massively for the New Patriotic Party (NPP) to enable him to retain power in the upcoming general elections.

The President says his government has done a lot for Zongo communities in the country and will do more should the party be given another term.

While addressing chiefs and imams of the Zongo community in Kumasi as part of the Eid-ul-Adha celebrations, the president promised to do more for Zongo communities.

“I am here to plead with you that just as you did in 2016, vote for me again come December 7. If you are pleased with my work in the Zongo communities vote for me. There are more developmental projects I will bring to your doorsteps so I am pleading with you to help me.”

Meanwhile, Vice President Mahamudu Bawumia has said that the Akufo-Addo-led government has by far cared more for deprived communities than any other government in recent history.

Speaking at the virtual Eid prayers held at the forecourt of GBC on Friday, Dr. Bawumia cited the Zongo Development Fund and the Inner-City and Zongo Development Ministry as already ensuring human and infrastructural development in Zongo communities.

He further outlined the many interventions the administration has implemented in the inner cities including scholarships for brilliant but needy students from deprived communities, as some life-changing policies that are having a real impact on lives that would otherwise be neglected.

He pledged to do more including the building of 16 model SHSs in the Zongo communities to further develop the human capital in those areas if given another term.