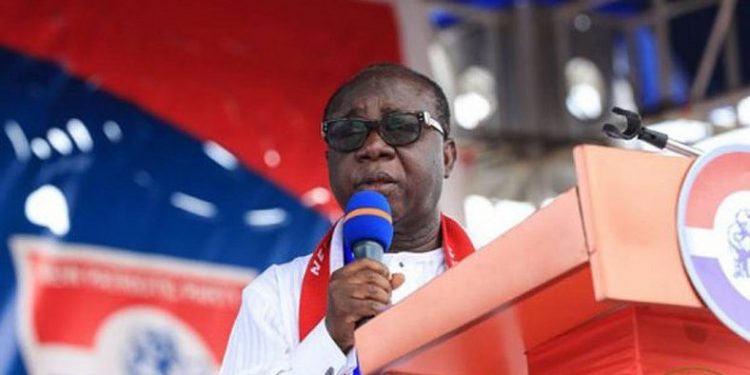 The governing New Patriotic Party (NPP) has accused the opposition National Democratic Congress (NDC) of doing everything possible to undermine the peaceful voter registration exercise being conducted by the Electoral Commission.

Addressing a press conference at the Alisa Hotel on Tuesday, August 4, 2020, National Chairman of NPP, Freddie Blay said the NDC does not have a message to Ghanaians in the upcoming 2020 polls hence making baseless and ethnocentric claims.

“The NDC is desperately trying to undermine the simple and peaceful exercise of voters’ registration into one of ethnocentrism, outright fabrications, needless exaggerations, and old fashioned fear-mongering propaganda and inferior communists tactics. It has not been very smooth, I must say, but the Electoral Commission, the only institution with sole authority to determine elections has had to prove its mettle during this exercise,” Mr Fredie Blay said.

Mr. Blay made the remark on the back of the banter between the NDC and NPP as both parties accuse each other of violence and busing of people to centres to take part in the voter registration exercise.

The NDC led by its flagbearer, John Dramani Mahama had accused the government of using security agencies to suppress votes in the NDC’s strongholds.

John Mahama, recently spoke against what he calls the “discriminatory” use of military personnel by President Akufo-Addo to disenfranchise some Ghanaians in Banda in the Bono Region.

The party had also complained that the government had deployed military some areas including the Volta Region with the hope of intimidating residents from registering to vote.

In all such instances, the Akufo-Addo government had rubbished the claims.

Provide evidence that voters are being suppressed – Nitiwul challenges Mahama

The Minister of Defence, Dominic Nitiwul on Monday, August 3, 2020, challenged John Mahama to prove claims that non-Akans and Ewes are being intimidated in the ongoing voter registration exercise.