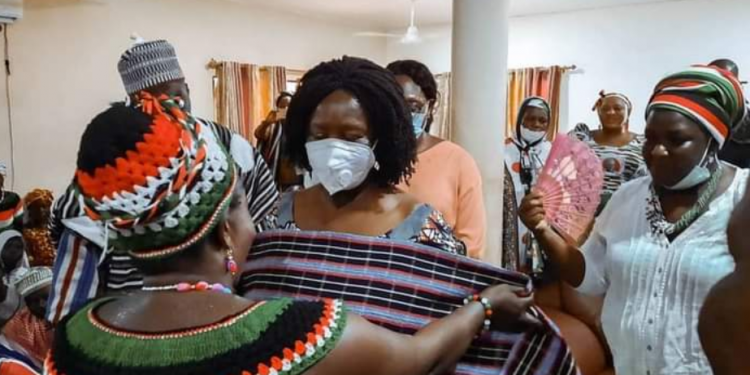 The Vice-Presidential Candidate of the National Democratic Congress (NDC), Professor Jane Naana Opoku-Agyemang, has been enskinned Development Queen mother in the Samini Traditional Area of the North East Region.

Her skin name is “Ziiniaya Daana,” which means “Queen of Development and Light.”

At a colourful ceremony at the Poanaa’s Palace in the East Mamprusi District, as part of her tour of the region, the Traditional Authority Poanaa Ayishetu Abdulai Sheriga conferred the chieftaincy title on the NDC running mate.

Poanna Ayishatu’s elders explained that she is one of only two women who are Chiefs in the area.

Invoking the spirits of the gods, the Poanaa prayed for victory for Prof.Opoku-Agyemang and President John Dramani Mahama in the upcoming general election.

She stressed the NDC’s pledge to run a campaign devoid of insults, adding that politics of violence undermines the country’s cohesion and development.