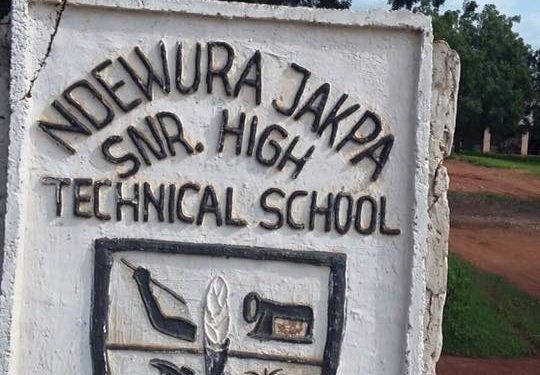 The Savannah Regional Police Command has deployed police officers to the Ndewura Jakpa Senior Technical High School in the West Gonja Municipal Assembly following a demonstration by students of the school.

The students demonstrated on Wednesday evening against school authorities because of the strict social distancing and invigilation during the West African Senior School Certificate Examination (WASSCE).

The demonstration saw the students attacking and causing damage to the new six-unit school block which was built to help end the double-track system for the school.

The students cut the power in the school and broke streetlights on campus.

The Police Public Relations Officer of the Savannah Regional Police Command, Sergeant Owusu Adjekum speaking to Citi News said: “The headmaster of the secondary school came to the regional headquarters and complained of the students demonstrating.”

The police personnel were then dispatched to the school to maintain law and order.

“On seeing the police, the students fled. The police patrolled the school until this morning. No arrests have been made,” Sgt. Adjekum recounted.

A journalist with Peace and Development FM in the Savannah Region, Richard Forgor, giving updates on the situation, said calm had returned to the school and students were in the examination hall for a paper today, Thursday.

The Ghana Education Service is set to investigate the matter and has invited the leadership of the students to give an account of their side of the story.

The timely intervention by the Savannah Regional Minister, Adam Salifu Braimah and MCE for West Gonja Municipal Assembly, Muhazu Jibreel Saeed also led to the situation being brought under control.

The Savannah Regional Minister appealed to parents and other stakeholders to help keep the situation under control.

The MCE, Saeed Muhazu Jibreel, said investigations will be conducted and the perpetrators of the act will be dealt with according to the rules.